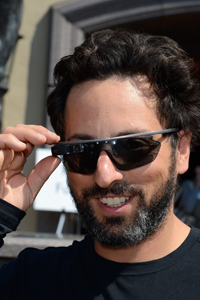 Google co-founder Sergey Brin uses a button on top of his Glass to take a picture at the Sun Valley Conference in 2012. Though Brin had to layer his Glass with standard sunglasses at the time, Google announced several Glass-compatible frames in early 2014.
Kevork Djansezian/Getty Images

If you were to take apart a Glass, two things would likely happen: You'd discover the components that make the glasses work and you'd feel a deep sense of regret for ripping apart a $1,500 gadget. Fortunately, other people have already done this on your behalf.

There are a few different ways to control Google Glass. One is by using the capacitive touch pad along the right side of the glasses. The touchpad responds to changes in capacitance, which is essentially a weak electrostatic field generated across the screen. When your finger makes contact with the panel, a controller chip detects the resulting change in electric capacitance and registers it as a touch. Swiping your finger horizontally allows you to navigate menus on the device. Swiping downward on the touchpad backs you out of a choice or, if you're at a top-level menu, puts the glasses in sleep mode.

Another way to control Google Glass is through voice commands. A microphone on the glasses picks up your voice and the microprocessor interprets the commands. You can't just say anything and expect Google Glass to respond -- there's a set list of commands that you can use, and nearly all of them start with "OK, Glass," which alerts your glasses that a command will soon follow. For example, "OK, Glass, take a picture" will send a command to the microprocessor to snap a photo of whatever you're looking at.

As of early 2014, the processor in the Explorer version of Google Glass is from Texas Instruments. It's an Open Multimedia Applications Platform chip (OMAP). These chips belong to a larger classification of microchips called systems on chip. That means there are multiple components working together -- in this case, an ARM-based microprocessor, video processors and a memory interface. According to Texas Instruments' specifications, the chip is capable of playing video at 1080p resolution and 30 frames per second.

The main circuit board also houses a SanDisk flash drive for memory -- 16 gigabytes' worth of storage, though only 12 gigabytes are available to the user. A company called Micron Memory (formerly known as Elpida) supplied the dynamic random access memory (DRAM) chip. These chips provide not only storage for media and apps, but also the memory that the microchip requires to run programs on the Glass.

While you can use Google Glass to take photos and videos without having it connect to the outside world, to get the most from the product you'll need to connect to the Internet. The two ways to do that are over Bluetooth (connecting to some other device, such as a smartphone) or WiFi. A single chip inside Google Glass provides support for either type of connection. Another chip, the SirFstarIV, is a global positioning system (GPS) microchip that allows Google Glass to determine its location via satellite signals [source: Torborg and Simpson].