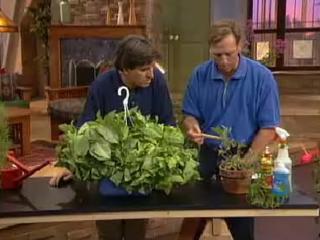 Get expert advice on how to maintain and take care of indoor plants on Discovery Channel's "Gimme Shelter."
Discovery

You mean well when you buy house plants. You want the greenery to liven up a room, or you want something to care for without having too much responsibility. And then, well ... they end up dead. Whoops! You forget to water your plant after work, or you go on a trip, or you don't give it enough sun, and it withers up.

If you're not a pro gardener with a green thumb, able to keep each and every plant alive and thriving, you've probably thought about ways to keep plants alive longer. What's the cure for a cursed black thumb? Maybe a little bit of technology. Enter the computerized planter: a little box with some electronic brains can take the guesswork (and plant killing) out of home gardening.

The farming world has long had programmable planting monitors that guide massive row planters to control seed laying and fertilizing. Now you can get a programmable planter at home, too, but it won't work quite like its industrial counterpart. The programmable planter idea has been merged with the world of aeroponics to create a soil-free, smart growing box that keeps plants alive without daily supervision. It's a neat concept. You don't water the plant. You don't fertilize it, either. In fact, there's not even any soil in the planter!

That should come as no surprise if you know about aeroponics -- we'll go into more detail on that in just a bit -- but these planters place plants in a unique cartridge that keeps them fertilized while the growing box itself provides hydration. They're built on an idea that computer-minded gardeners have had for years: Why bother to remember it's time to water a plant when we can program something to do it for us?

Over the next few pages, we'll take a look at how the computerized planter works and see what kinds of plants it can grow with its automated aeroponics system. We'll also check out some homemade alternatives that look a bit more like traditional planters -- soil included -- but with a computer programming twist.

Run a Google search for computerized or programmable planters, and you'll mostly see results pointing to two things: industrial farming equipment, and the Click and Grow. It's not a booming category, and all sorts of blogs picked up on the Estonia-developed Click and Grow for being something unusual when it was introduced in 2010. The device itself looks pretty unassuming. It's a small, square flower pot with a flat, removable lid. The interior of the plastic pot is actually mostly a hollow water reserve meant to hold a liter of water. The pot will slowly draw on that water to keep plants hydrated.

An LED light on the front of the Click and Grow pot will flash blue, green and red to provide simple status updates. Blue means the planter needs more water. Green means everything's groovy. Red indicates low batteries, which are the planter's final component. The Click and Grow couldn't be computerized without an energy source, and four AA batteries serve up power to electronics inside the planter that sense when the plant needs to be watered.

Click and Grow is more of a computerized planter than a programmable planter because, well, you don't really program anything! The planter takes care of everything, except occasionally adding more water. In that regard, it's similar to a more basic self-watering planter. The difference is in the electronics: Click and Grow uses sensors to nourish a plant, while traditional self-watering planters just have a water reservoir that is gradually absorbed through a porous inner pot. Of course, the pot is only half of the equation. Let's take a more detailed look at the plant cartridge that sits at the heart of the Click and Grow. 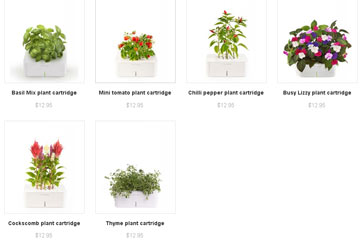 As of May 2012, the following six cartridges are available from Click and Grow: basil mix, mini tomato, chili pepper, busy lizzy, cockscomb and thyme.
Screencap by HowStuffWorks

Click and Grow sells a pair of starter kits that include the planting pot and a pre-installed cartridge. They offer basil and painted nettle kits for about $100. Other cartridges cost about $13. As of May 2012, Click and Grow sells seeds for basil, mini tomatoes, chili peppers, busy lizzy, cockscomb and thyme.

As we mentioned on the last page, a starter plant cartridge is more than a simple container for seeds. The plastic housing fits inside the flower pot, and is perforated with large holes in the top for plants to sprout out of. To sprout, seeds need three things: nutrients, water and sunlight. Water is added to the pot and the sunlight part requires you to find a nice spot for the plant on a window ledge or under a strong light source. And what about the nutrients? They come in the plant cartridge.

Typical aeroponics systems are used to grow plants in a mist instead of a normal growing environment like soil or water. Click and Grow describes its system as something different: The growing medium uses minerals to mimic the buffering ability of soil by absorbing and releasing nutrients. The site's blog claims its mineral balance eliminates the drawbacks of home-use aeroponics systems because fluctuations in water quality and uneven fertilization aren't issues [source: Click and Grow].

The cartridge's mineral release system is designed to release nutrients that it detects are in minimal supply to promote growth. Consider it the plant equivalent of a balanced breakfast -- every food group is represented! And nothing goes to waste -- unlike a plant growing in soil, the Click and Grow's cartridge doesn't lose nutrients to decomposition. The blog calls its mineral release system nanotechnology, which makes perfect sense when you think about it: The cartridge really is releasing elements like nitrogen and potassium into the growing environment to balance out a plant's mineral intake.

These proprietary cartridges take one to two weeks to sprout and reveal a healthy growing plant. After that, your new flora will remain healthy for the duration of its natural life, as long as it has light and water (which needs to be refilled every month or two). Talk about a hands-off growing experience!

The Click and Grow shows how simple gardening can be with computer aid, but it doesn't demonstrate the full flexibility of programmable planting. Next, let's look at the do-it-yourself method: building an Arduino planter.

Arduino is an open source programming platform designed to give hobbyists a cheap, accessible and flexible way to add extra functionality to just about anything. The Arduino board supports all kinds of sensors, like light sensors or proximity movement sensors, and through programming, their readings can be used to take some sort of action. Example: Photographers can use an Arduino board to trigger a flash and picture snap based on sound. Here's a better example: A programmable planter can be configured to water a plant every time it measures the soil's moisture level dropping too low.

That's the key to homebrew gardening applications like the Garduino, which is truly a programmable planter. The Guardino uses sensors to detect moisture level and water plants. It uses a photocell light sensor to detect when the sun goes down, which triggers grow lights to provide a few more hours of nourishment. It even lights up a warning LED when the temperature drops too low. Garduino is a great example of how versatile homemade solutions are: It uses a pair of nails driven into the soil as conductors to determine moisture level. The sensor reports a lower resistance when the soil is especially moist.

All of the sensors plug into a simple Arduino circuit board, which costs about $30. Open source projects get posted across the Web and sometimes expanded upon by enterprising developers and tinkerers in the open source community. Garduino got such an upgrade with support for Twitter. The enhanced programmable planter sends out tweets containing sensor readings to reassure gardeners that everything's hunky-dory while they're at work.

Garduino is hardly the only Arduino-based gardening helper out there. Garduino and alternatives like a water pump-based system designed for tomatoes require a little bit of programming know-how and a willingness to cobble together lots of parts, but construction is part of the fun, anyway. Gardening is about building something, too, though not in quite the same way.

Since I'm a tech geek, I take any opportunity I get to write about something cool made with an Arduino. The Click and Grow is a neat planter since it does all the work for you, but it's also very limited in terms of what it can grow. A DIY project like the Garduino is tougher to get going, but much more flexible. I enjoy researching and spreading the word about projects like that -- it's great that such sophisticated ideas come out of such inexpensive components!