Browse the article Are nanomaterials dangerous? 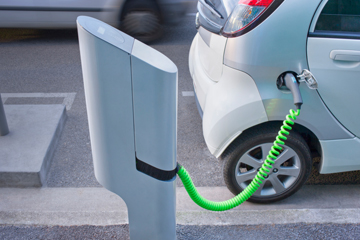 Nanomaterial electric batteries are in the works, which could help push forth the electric car revolution.
Gregor Schuster/Photographer's Choice RF/Getty Images

Nanomaterials are made of nanometers, and are structures that scientists make by manipulating atoms. Basically, in the most general of terms, a few atoms lined up in a row makes up a nanoparticle.

Let's first take a moment to appreciate their finer qualities.

According to a 2011 episode of NOVA, nanotechnology occurs on a scale that's approximately a thousand times thinner than a human hair. Nanomaterials are engineered to be extremely strong yet very light, and can also be made into different shapes depending on the scientist's needs. These nanoparticles can be used to improve everyday objects in ways you might take for granted, like stain-resistant clothing. Also, a lot of the investment in nanomaterials is inspired by the auto industry. Super-light body frames, exterior panels and interior accoutrements also have the benefit of being rather strong, and therefore safe. Also, nanomaterial electric batteries are in the works, which could help push forth the electric car revolution.

And now for the bad news. Nanomaterials are broadly considered rather dangerous, in part because they haven't been researched enough for us to really understand their limits and capabilities...and in part because screwing around with chemical compounds always carries some level of risk. Here's why nanotechnology is an industry that has great potential but is hotly debated.

Nanomaterials are hard to study.

Nanotechnology is a fairly new area of research. In some cases, there aren't even any ways to test and determine the toxicity of a particular substance. Another concern is that, if a really common element is formed into an unusually-shaped particle, it could be the shape of the particle that was dangerous, not the element itself. Existing tests would only confirm that the nanoparticle was a specific substance, which the scientists would already know. And their impact is being considered beyond the influence on human health, but the sector is also too new to really understand the long-term effects of nanomaterials on the environment, such as how far they'll travel and how quickly they break down.

If a particle can slip practically anywhere, it's almost futile to try to determine the effects of its intrusion, but extremely dangerous to sit back, wait, and see what happens. Scientists have learned from the asbestos crisis and other chemical revolutions, though -- new materials are studied a lot more closely before they're purported to be safe.

They can go anywhere...or, at least, we haven't determined yet where they can't go.

We know, for example, that nanomaterials in health and beauty products (like sunscreen and makeup) are small enough to be absorbed through the skin. Maybe some of these particles that seep in are actually harmless. And some people might be reassured by the fact that these products face a lot of regulations before they're considered safe. But the fact is, they're tested under the assumption that the human body will absorb or ingest only incidental amounts (consider those scary warnings not to swallow toothpaste). Safety tests might not apply if, for example, your sunscreen seeps right through to the inner layers of your skin (and perhaps beyond). Keep in mind that most topical products have warnings that they shouldn't be applied to damaged skin or open wounds. But if a nanoparticle can slip through your pores as easily as you can walk through a door, avoiding that paper cut on your hand might not be enough of a precaution. (Now multiply that by a few billion.)

Nanoparticles are only a couple of atoms wide, and it's been long known that they can easily penetrate skin. However, they can also be absorbed by the tissue of other organs, where the wrong combination can really cause some damage. And it's not just the size that's a problem. Particular shapes (such as long, thin tubes and flexible fibers) could cause inflammation, infection, and serious illnesses if they invade human tissue. Think of the effects of allergies...except with chemical compounds. And that's just the starting point. Another good example is asbestos -- though it doesn't fit into the nanotech category, it's a scary illustration of what can happen when products that aren't well understood are rushed to market and are absorbed by the human body.

They can be made of almost any chemical compound.

Or at least, it seems plausible. Though it's hard to believe scientists have already created every nanoparticle possible, the techniques can be applied or modified to suit whatever purpose desired. And that leaves open some scary -- and yes, highly dangerous -- possibilities. This is arguably why nanomaterials are the most dangerous -- because they haven't come close to reaching their limits, and we can't even imagine what those limits might be. On such a small and difficult scale, even the most innocuous of everyday scientific elements might have unpredictable results [source: Levin]. Now imagine the consequences of intentionally creating malevolent nanomaterials.

In recent years, not many answers have been found. Andrew Maynard, a physicist at the University of Michigan, told NOVA that "We have remarkably little information on actual health effects" [source: Levin]. So, despite billions of dollars a year in government and industry research, nanotechnology is, so far, raising at least as many questions as it answers.

Of course scientists, chemists, researchers, engineers and inventors want to focus on the positive points of new and potentially terrifying technology. And it's true; there are a few positive aspects of nanomaterials. They can be used to engineer incredibly strong and light new structures, and that's cool. The impact on the automotive industry alone shows quite a bit of promise, and if you want to make me stop fretting about, say, being slowly poisoned by my new lip gloss, or the threat potential bioterrorist attacks, just enter my peripheral vision in a really fast or interesting new car.

In the course of my research for this article, I found out about a company called Catalytic Clothing that was founded by a former fashion designer. The fashion industry is almost as interesting as makeup and vehicles, so I was intrigued by Catalytic Clothing's idea to embed our clothes with nanoparticles -- a good kind! -- that will actually remove pollution from the air as we walk around. The concept is this: If we have to move around anyway, we might as well help the environment at the same time. For every mile you drive your car, consider how much work it'll take to clean up that pollution. And perhaps for every dangerous nanoparticle that's made, there will be a positive counterpart.