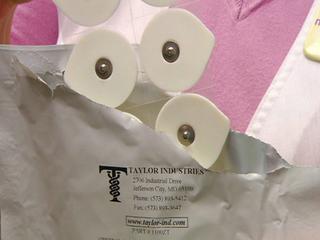 How It's Made: Medical Electrodes
Science Channel

As anyone who's spent an extended amount of time in the hospital knows, half the hassle of recuperation is being awakened for monitoring and testing, sometimes every few hours. This 24-hour cycle of care is the standard for ailments and afflictions, because it's important to measure and record a patient's well-being over time. Often, for example, a heart malfunction or the progress of cardiac treatment requires readings taken repeatedly throughout treatment -- both to catch anomalies and to establish an overall picture of that patient's general heart health.

But imagine if readings of your heartbeat, breathing, temperature and other major factors in ongoing recovery could be collected, processed and analyzed passively, without any need to bother or even wake you? With wireless technology and computer analysis making their way into so many other parts of our daily life, it's inevitable that the medical community would be looking for ways to use this technology. In this case, shortening and improving patients' in-hospital care, with an eye toward eventually monitoring patients at home, and even adapting the technology to other industries and uses.

That desire to improve patient care using technology has led to the invention of a garment that can gather data on a patient's vitals and relay it in realtime to health care professionals.

The Shirt Knows Your Vitals 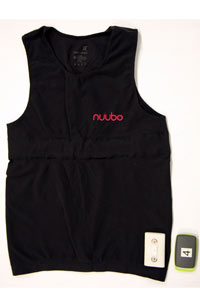 At Madrid's Carlos III University, researchers have developed a garment that could revolutionize hospital care -- and the lives of patients once they leave the hospital. By means of a washable tank top design, in which readings are collected and sent wirelessly to a central system, doctors and hospital staff will soon be able to keep a nearly realtime record of patients' heart and lung activity, whether the patient is lying down or engaging in activity, even their location within the hospital -- all without bothering patients in the night, or introducing the human error of data collection. By increasing the number of datapoints and making the conditions of your monitoring as consistent as possible, the shirt could even help doctors figure out extra symptoms or rule out possible diagnoses with greater accuracy.

The LOBIN shirt is designed to be comfortable, but also fairly tailored to the body so it remains in constant contact with the skin -- which solves the problem of those flyaway gowns all patients dislike. After all, the reason conventional gowns leave us feeling so, let's say, exposed is because they need to allow easy access for all those tests and measurements. Making the outfit itself responsible for that data solves multiple problems -- and creates a data narrative that could be more informative than even that rigorous and regular in-patient testing. Throughout the shirt, electrodes, a temperature monitor and an accelerometer are all gathering patient information and transmitting it as useable data for medical professionals.

The project, which has been tested in various environments, should go to market by 2013. No price point for the shirts and monitoring tech has been mentioned publicly. As of mid-2012, the plan for is for data to be sent to "beacons" placed around the hospital and fed to a central computer, where histories and workups can be generated for doctors' use in treatment. And for those patients that might be prone to wander, the data can even pinpoint their locations to within a few yards. The shirt itself is washable, because the majority of the circuitry is contained in a separate device that plugs in. The project team says that they're working on refinements, including integrating the monitor into the garment itself.

The Future of LOBIN and Smart-apparel Technology 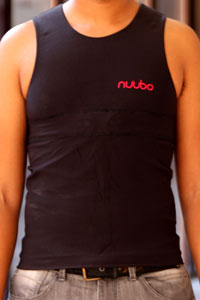 A patient wearing a LOBIN Smart Shirt may benefit from the added freedom the garment allows for, including the possibility of earlier hospital releases.
Image courtesy UC3M

This application of technology means big changes, not just for hospital guests, but across a whole spectrum of human uses. Imagine if you could leave the hospital weeks, or months, early: Wireless transmission of your stats could help doctors assess your status while you're in your own home or going about your normal life. The LOBIN shirt as now designed can even be set to send text alerts to doctors if certain conditions -- heartrate, say, or temperature -- go above certain levels.

Of course, the downside is that patients could easily introduce their own human errors. We've all heard stories about patients abusing or neglecting their prescription regimen, and in fact most of us have forgotten to take our pills when getting over an infection or flu. After all, any treatment -- whether pharmaceutical or via medical device -- is subject to patient neglect and error. If the electrodes and other monitoring tools in the shirt aren't in direct contact with the patient's skin, readings will be inaccurate, or won't be taken at all. But by the same token, patients who are committed to receiving (and taking) the best care for their bodies that they can will soon be given that much more freedom to do so, while also making hospitals more efficient and happier places to be.

And it's not just hospitals that will benefit from the developments in this technology that we're seeing now: Scientists on the project also predict innovations for those in high-stress athletic or physical occupations will also benefit. The same technology can help predict heart irregularities long before patients in dangerous jobs would even notice a problem. The possibilities and permutations of this technology are endless, once you think about it, and with transistors continuing to get smaller -- and micro- and nanobuilding capabilities ever expanding the materials we can use to build these circuits -- it's possible that one day "dumb" clothes will seem as comparatively silly as beepers and candy-bar phones seem to us today.

I've been interested in wearable technology for a long time. As we move out of the personal-computing era and bring the internet and cloud into our regular gadgets and appliances, it's seemed inevitable that we'd find other uses for the clothes we're wearing anyway. It's cool to see a group actually pushing the boundaries of what's possible in mass production -- and helping people at the same time.