How the LG Styler Works 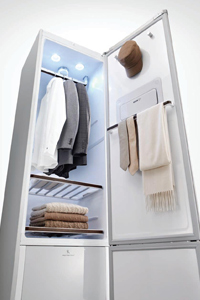 Yes, it looks like a fridge. But this machine is actually designed to provide hot, steamy air that penetrates clothes.
Courtesy LG

Observers often peg LG's Styler as a skinny refrigerator. Even when you open the machine, its bright white interior and lower shelves make it look seem like a likely place for a six-pack instead of a Stuart Hughes.

There's no cooling technology inside, of course. Rather, it's the opposite. The Styler's linchpin is a steam generator that fills the compartment with water vapor. Bountiful steam sanitizes each garment, destroying 99.9 percent of bacteria and other microorganisms that cause foul odors.

To really put down tough smells, such as tobacco smoke, the door of the Styler has a slot for aroma sheets. Insert a sheet of your choice and your clothes will have a whiff of, say, cotton candy instead of your late-night taco binge.

After the steaming process ends, a heat pump raises the temperature so that the air to about 131 degrees Fahrenheit (50 degrees Celsius), which draws moisture from your clothes. Heat pumps use some nifty heat-moving tricks to cut down on dampness. You can read all about them in How Heat Pumps Work.

Then, to really work out the kinks in your clothes, LG also incorporated a clothing hanger that literally shakes your suits or dresses. The hangers sway back and forth 220 times per minute, or much faster than your tired arms could ever go.

On the next page, we'll take a peek at the Styler's hardware and see how it works its steamy fabric magic.