How the Ion Proton Sequencer Works

What Makes the Ion Proton Sequencer So Special? 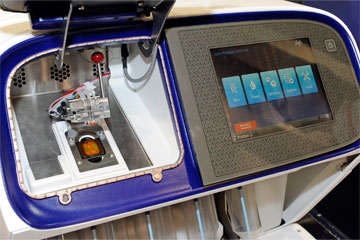 We're going to put the name thing to rest. Ion. Proton. Sequencer. The name is basically corporate taxonomy. "Ion" comes from Ion Torrent, the name of the brand (owned by Life Technologies) that makes this device. "Proton" is the model name of this product; sort of like naming a car "Fusion" or "Tribeca," the cars don't run on nuclear power, nor are they built in a trendy Manhattan neighborhood. And "Sequencer," well, that's just what the machine is -- a sequencer. We'll call it the Proton for short.

The system was unveiled in January 2012 and got immediate attention for its bold claims of delivering $1,000 genetic sequences in a single day. Considering that the human genome had been decoded nine years earlier, potentially putting the power of human genetic information into every hospital is a giant leap forward.

The company announced that the Proton 1 chip for its new sequencer would be available by mid-2012 and capable of handling much bigger sequencing jobs than its predecessor, the Personal Genome Machine (PGM). By the end of 2012, Life Technologies said it would have the Proton II chip on the market, which could take on the entire human genome in one shot.

From the perspective of scalability, the Proton is a smash hit. The entire machine is roughly the size of a medium-sized laser printer that you might find at any office, and it costs about $150,000. That's three times as much as the PGM, but that's still a lot of earth-shattering capability for your medical dollar, considering that an MRI machine can run a few million dollars. Granted, the results offered from MRI and genetic sequencing are the proverbial apples and oranges, but they're both noninvasive procedures that can allow doctors to observe a patient's condition with life-saving detail. Considering how MRIs took off to become a tool in every hospital's standard-issue arsenal, it's likely that sequencers will become the next big must-have for any reasonably sized hospital in the next couple of years. The biggest limiting factors may prove to be finding trained personnel to run tests and interpret data, as well as receiving U.S. Food and Drug Administration approval for medical use. But we'll talk about that later.

As you can imagine, companies are lining up alongside Life Technologies to meet this demand. Days before the Proton was announced, competitor Illumina released its comparable system, the HiSeq 2500 (about $740,000 to buy new). While early speculation suggested that Illumina's system could provide cleaner reads on a single test, the Proton seems the winner in the battle of price tags [source: Herper]. In fact, now that life science companies like Life Technologies, Illumina and Pacific Biosciences have made the human genome more accessible, there will likely be an explosion of sequencers at a variety of price points competing for lab space among researchers and medical facilities.