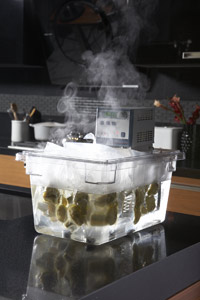 Shrimp cook in a hot water bath in the sous-vide method courtesy of an immersion circulator.
Caren Alpert/Getty Images

At the dawn of the 19th century, an American-born Bavarian noble named Benjamin Thompson became interested in the subject of heat. Thompson, or Count von Rumford as his Bavarian patron titled him, wanted to know how heat could transfer through various media. He wrote extensively upon the subject, citing experiments such as plunging cored, peeled apples first into ice water, and then into boiling water to see how long it took for them to change temperature.

Many of his experiments focused on food -- the count was very much interested in the subject. His inventions include devices as the double boiler and a kitchen range.

Thompson also noted that if food were sealed within a vacuum and then submerged in heated, circulating water, it would cook.His musings upon the subject remained in semi-obscurity for nearly two centuries. But in the 1960s, chefs in America and France rediscovered the technique. Today, we call it sous-vide, which is French for "under vacuum." It's a popular -- though often time-consuming -- way to prepare food to exacting standards.

The basic concept is simple: Vacuum seal the food you wish to cook in plastic bags. Immerse those bags in a hot-water bath -- temperatures tend to range between 105 to 160 degrees Fahrenheit (40.6 to 71.1 degrees Celsius). Maintain the temperature of the bath for as long as the food requires to cook through, which can be up to 72 hours for some foods [source: ThermoWorks].

Maintaining the temperature precisely is critical. That's where immersion circulators come in. They're devices that circulate the water and regulate its heat so that your sous-vide dish comes out perfectly.

The Anatomy of an Immersion Circulator

Before chefs rediscovered the possibilities of cooking with hot-water baths, immersion circulators were already around. They're important tools for scientists such as biologists and chemists, who sometimes need to keep samples at specific temperatures.

A basic immersion circulator has the following parts:

Here's how it works. First, you place the immersion circulator so that the heating element and tube are immersed in water. The control unit remains out of the water, typically perched on the edge of the container you're using. Then, you must provide power to the immersion circulator, typically by plugging it in to an outlet. You set the temperature you require for your hot-water bath using the interface. Each type of food requires a different temperature and cooking time. The control circuitry switches on power to the heating element, such as a set of coils that convert electricity into heat.

Constant circulation keeps the water at uniform temperature throughout the container. To do that, a pump pulls water into the mouth of a tube located at the base of the circulator. Water emerges from the top of the tube, which may or may not also be submerged in the water.

A good immersion circulator maintains a water bath's temperature to within a few hundredths of a degree. This precision is necessary for cooks who want a specific outcome with their dishes. After the prescribed cooking time completes, you remove the bags from the hot water bath and finish the dish with seasoning or other preparation methods -- such as searing -- and serve. 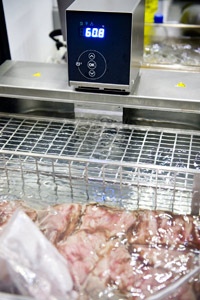 How do the heating elements work? It's through a process called joule heating. A joule is a derived unit of energy named after the physicist James Prescott Joule. A joule is equal to the work required to move an electric charge of 1 coulomb through an electric potential difference of 1 volt. It's also the amount of energy expended to produce 1 watt of power for 1 second.

Joule heating relates to another aspect of electricity -- electrical current resistance. We call material that allows electricity to flow through it a conductor. But most conductors aren't perfect -- they have what we call resistance to electricity flow. This resistance results in electrical power loss. But the laws of thermodynamics state that you can't destroy energy, so where does the power go? It converts into heat.

So let's say you've got a conductor that generates heat sufficient enough to increase the temperature of several liters of water from room temperature to around 140 degrees Fahrenheit (60 Celsius). That conductor may need to be several feet long to generate enough heat at a safe level of power. By coiling the conductor, you can have enough length without taking up too much space. That's why you'll find heating coils in devices like toasters or space heaters.

When you set an immersion circulator to a particular temperature, the control circuits will direct an appropriate level of current to the heating coils. As the coils heat up, they transfer heat to the surrounding water. The pump in the circulator causes water to flow through the coils, creating a more even heating environment. As the temperature of the water nears the target temperature, the control circuits can direct less current to the coils. Since joule heating depends upon resistance and current, decreasing the amount of current flowing through the heating element generates less heat.

Pump it Up with Fluid Dynamics

Immersion circulators use pumps to move water through the heating element and back into the water bath. There are two basic approaches pumps can use. One way, called a reciprocating pump, uses a lateral motion to pull liquids through a space. A piston moving through a cylinder is an example of a reciprocating pump. As the piston moves out of the cylinder, it pulls in fluid. As the piston moves back into the cylinder, it pushes fluid out. With one-way valves, you can control where the fluid goes, redirecting the flow.

The other type of pump is called a rotary pump. Rotary pumps use a rotor called an impeller. It looks a lot like a fan enclosed in a pipe. If you submerge an impeller in water and then spin it, the spinning motion pushes fluids outward. If you use valves to create a one-way path, with water coming in from the bottom of a pipe and going out through the top, water circulates as long as the impeller continues to spin. The outgoing water creates a vacuum, which pulls more water into the rotary chamber.

In either case, the pumps circulate water by pulling liquid up from the bottom of the hot water bath and moving it to the top. As the hot water circulates, it heats more evenly than it would if the water were still. To understand why, we need to take a quick look at fluid dynamics.

Heat transfers through a fluid in a process called convection. In general, fluids are poor heat conductors but are good thermal insulators. When a fluid heats up, the particles within that fluid expand and become less dense. As the density of fluid particles decreases, they rise up and cooler, denser particles sink to take their place, creating little currents.

If you were to use a heating element on its own, these little currents of fluid would form naturally over time and distribute the heat. But it's a gradual process. The pumps circulate the water, creating forced convection, speeding up heat dispersal. 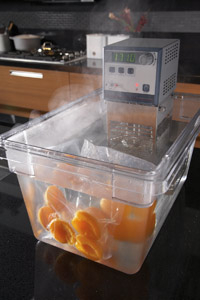 You can cook fruits and vegetables as well as meats using the sous-vide approach.
Caren Alpert/Getty Images

Cooking with an immersion circulator falls into the low-and-slow category. That means you're using relatively low heat over a relatively long time to cook food. Instead of cranking up the stovetop or grill and cooking a cut of meat in less than 10 minutes, you immerse the vacuum-sealed meat in a hot water bath for up to a few days. But why would anyone do that?

The gradual cooking method allows you to cook through food completely from the outside to the core. By setting the heat of the water at a precise temperature, you can transfer heat to cook the food evenly. Other methods of cooking can result in uneven cooking. For example, a grill might be so hot as to cook the outside of a cut of meat while keeping the inside undercooked. Leaving the food on long enough to cook through could mean you end up burning the outside edge.

By cooking at lower temperatures, you can also avoid damaging the food you're cooking. Cook food at too high a temperature and you'll break down the cellular walls within the food itself. Using the correct temperature in a water bath, you can avoid overcooking foods.

According to chefs, the vacuum seal helps ensure that food cooked in the sous-vide style tastes as flavorful as possible. They say that because the food isn't losing juices and flavors to the air and water around it, they remain within the food itself. And the air-tight seal on the plastic bag helps keep food moist as it cooks, meaning you won't end up with a dried-out meal at the end.

Because water makes up a large amount of the mass of many foods, using a cooking method that preserves moisture within a food also avoids shrinkage. If you've ever grilled a hamburger and noticed that the finished burger is noticeably smaller than the patty you made, part of the reason is because the burger loses mass in the form of water as you cook it. The water evaporates out and the burger loses that mass.

With a precise immersion circulator, you can also count on the consistency of this cooking method. As long as you account for the type and amount of food you're cooking, using this method should produce the same results every time. While you may have to estimate cooking times for less precise methods of cooking -- such as using a charcoal grill -- the sous-vide method relies on nearly scientific precision to create replicable results.

The biggest drawback of the sous-vide method is that it requires a lot of time to cook certain foods -- sometimes requiring several days. It's not the cooking method to break out 20 minutes before dinner. But with the right time and equipment, cooking with an immersion thermal circulator can help you create a flavorful meal.

I became fascinated with immersion circulators watching cooking shows on television. Fancy cooking gadgets catch my attention easily. If you can cook stuff using liquid nitrogen or intricate gadgets, I'm in! The immersion circulator intrigued me because it takes a very precise and gradual approach to cooking the perfect meal. It appeals to my more scientific side, though I imagine I would find the sous-vide method of cooking infuriating when the munchies descend upon me.