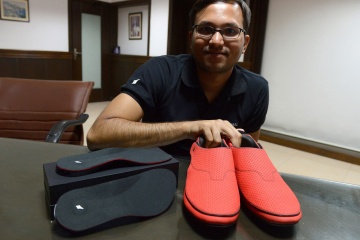 Haptic shoes and insoles are expected to hit the market in 2015.
© NOAH SEELAM/AFP/Getty Images

As of this writing, you can't run to the store and purchase haptic footwear, although if all goes as planned, you'll be able to order them online soon.

Ducere Technologies' Lechal footwear has been undergoing testing at L.V. Prasad Eye Institute in Hyderabad, India, and the company is pairing up with that and other eye institutes and nonprofits around the world in the hopes of providing the shoes to the underprivileged at more affordable prices. Lechal shoes and insoles are slated to start shipping to consumers sometime in 2015, and you can go to their website and put yourself on the pre-order list now. The company also plans to release a software development kit (SDK) in early 2015 that will let developers sync their own apps with the Lechal app.

Ducere plans to release different versions, starting with a basic model that performs navigation only. A version that also detects obstacles is expected later. The initial Lechal shoes and insoles will be priced at around 6,000 rupees in India and between $100 and $150 elsewhere [sources: Coxworth, Mahalingam, Thoppil]. The price of the shoes and insoles is not expected to differ.

Proceeds from the sale will also help subsidize Lechal footwear for people in need through discounts to charitable institutions. The discounts are expected to be 30 to 50 percent as of September 2014, but the company hopes to increase the subsidies as they sell more product [source: Mahalingam].

Right now, Ducere seems closest to having haptic footwear on the market, but with the ready availability of the necessary tiny processors, sensors, actuators, batteries and other components, competitors will likely follow in short order. You could even potentially put a pair together yourself with some electronics and programming tinkering. Google Maps SDKs and application programming interfaces (APIs) are freely downloadable for various platforms, and Arduino and similar boards and accessories are not too terribly expensive, if you want to give it a try.

In any case, we will soon have the option of pocketing our smartphones and letting our shoes tell us where to go.

Haptic shoes and insoles sound like handy new devices that I wouldn't mind owning. I already strap a fitness device onto my wrist every day that syncs with my phone, so putting insoles into my shoes that do the same job (and more) isn't out of the question. And they have more important applications than replacing my watchlike step tracker because they can (and were designed to) help people with visual impairments get around on their own. The fact that buying them might help someone else in need adds to the appeal.

Researching this article has also once again brought me into the world of embedded electronics and kind of makes me want to go buy some Arduino Lilypads and other components and start wiring up all my clothing to do various things. But perhaps, if other people make these wearables available first, I'll just go back to my dream project of making a robot.