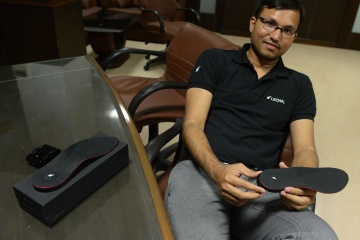 The shoe being developed by Ducere Technologies differs quite a bit from the prototype, but it will still give the user directions via haptic feedback. Instead of one shoe, the technology has been incorporated into both, and either the right or left shoe will vibrate to tell the wearer which way to go. The insoles designed to fit into your regular shoes work the same way.

The technology incorporated into the commercial shoes and insoles likely includes quite different hardware than the prototype, but it still involves microcontrollers that can sync via Bluetooth with a smartphone app (which will be required to use the shoes or insoles), along with batteries, actuators and sensors that allow for even greater functionality. This wearable technology will help anyone navigate by foot via subtle vibrations in the shoes, but it has also been programmed to allow the user to tag locations via a tap of the foot. And fitness tracking capabilities have been worked into the footwear and accompanying app. The haptic footwear has even been designed to beep or buzz when the user gets a certain distance from the smartphone so that he or she knows to grab the phone.

The Lechal app is available for Apple iOS, Android and Windows devices in multiple languages. The app uses the phone's GPS with compass hardware and its Internet capabilities to get Google Maps data for directions. The direction data gets communicated back to hardware in the shoes or insoles, which triggers the actuators in the appropriate one to vibrate when the wearer approaches a turn. The vibrations will also start off weaker and get stronger as the user approaches the intended destination.

Lechal shoes and insoles will come with two lithium polymer batteries that can each go three to five days on one charge. Each battery slips into the back of one of the shoes or insoles.

They also come with an innovative charger that can, in effect, hear and respond to audio. When you snap your fingers, the charger responds with a tone to let you know how far along it is in the charging process. It also has slots for both batteries so you can charge them at same time. The charger includes a USB connector so you can use it to charge a compatible phone or other device. It has 100 - 240 V - 50/60 Hz input and 5V DC 1 Amp output and is compatible with U.S., European or Asian outlets.