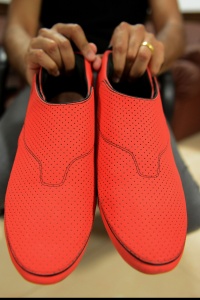 The style of the Lechal shoe is a low-profile sport silhouette.
© NOAH SEELAM/AFP/Getty Images

The Lechal haptic shoe was conceived by Anirudh Sharma, then a researcher at Hewlett-Packard Labs in Bangalore, India, as a way to give noiseless walking directions to visually impaired wearers via an affordable device. "Le Chal" means "take me along" in Hindi.

Sharma sketched the first prototype in 2010 and built it (with the help of two others) in 2011. That first build emerged from a Design and Innovation workshop in Pune, Maharashtra, India, held by the Massachusetts Institute of Technology's (MIT's) Media Lab and College of Engineering.

The prototype included an Arduino Lilypad microcontroller, a circular board designed for sewing electronics into wearable fabric items. The board, which has built-in Bluetooth capabilities, was used along with four actuators and a battery. The microcontroller was placed at the heel, and actuators were placed at the front, back, left and right, all within just one shoe.

The prototype received an award, and Sharma continued the work. He eventually quit his job at Hewlett-Packard Labs and partnered with Krispian Lawrence, formerly a patent attorney, to form the company Ducere Technologies. Incidentally, the two were introduced by a friend who happened to be visually impaired, although the idea of the shoe as an aid to the blind started well before they met.