What is Google Goggles?

Browse the article What is Google Goggles? 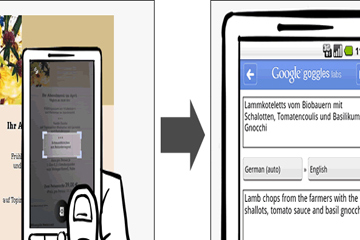 Goggles is a mobile, visual search feature of Google. Take a picture, upload it and Google will do its best to identify the object, place or text.
Courtesy Google

You're wandering the streets of London for the first time, soaking up the sights and sounds all around you, when you and a friend stumble upon a gigantic tower with a bell near the top. You both know the name of this famous bell, but neither of you can remember what it is.

To solve this mystery, you whip out your smartphone and begin guessing at Internet search keyword combinations that may (or may not) help you deduce the bell's name. Meanwhile, your friend simply points her phone's camera at the clock tower, snaps a picture and moments later, she has the answer: The bell's name is Big Ben.

To find the answer, she simply loaded a smartphone app called Google Goggles. Goggles is an Internet search feature that bypasses keywords for camera snapshots instead. In short, it's a type of visual search. Snap a picture and then let Google's algorithms do the brainstorming to figure out whatever it is that you see.

Google eventually wants the app to be a universal visual search tool. But Goggles is still in development (a fact that Google stresses), and identifying all sorts of stuff by snapshot alone is a major challenge.

For now, Google emphasizes that Goggles works its magic best on iconic sights, such as landmarks, book covers, bar codes, wine bottle labels, corporate logos and artwork. But the company is working on increasing the accuracy of Goggles. Keep reading to learn more about how Goggles might help you see -- and search -- your world with a fresh set of eyes. 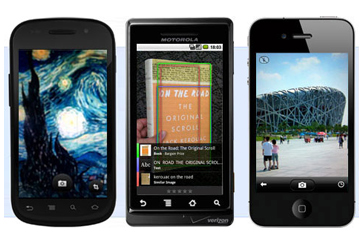 Goggles is a mobile-only feature, so most people use it by snapping pictures with their smartphone cameras.
Courtesy Google

Goggles is a mobile-only app, primarily because it's rather difficult to lift your desktop computer to take a picture of a landmark 30 miles away from home. Its capabilities are available for both Apple and Android smartphones, and it's also free.

To get the best results from Goggles, turn your phone to a horizontal (or landscape) position, with the top of the phone resting in your left hand and your right hand on the shutter button. Snap a picture of the object in question, submit your search and, so long as you have a decent wireless connection, you'll generally have an answer in a few seconds.

Goggles has plenty of everyday functions. For example, take a picture of a bar code or a QR code, and Google will load a plethora of information about the item you scanned. Or, if you meet a new colleague, snap a picture of his business card with Goggles. Google recognizes the card and automatically offers to save this information as a new contact in your phone.

The app is also a language expert. Take a picture of any text written in English, French, Russian, German, Spanish or Italian, and Google can translate those words into more than 40 languages. Never again will you fear to visit that fancy French restaurant just because you can't, you know, read the menu. Google recently gave Goggles puzzle-solving powers, too. Snap a shot of a Sudoku puzzle, and Goggles will kick back the answers to you in a flash.

Tired of going to the trouble of taking pictures for Goggles? Engage the app's continuous mode and just point your camera at objects, and you'll see a live stream of search results that appears on your phone's screen. What's more, if you let Goggles run ceaselessly in the background, the app will send you a notification every time it recognizes something. Expect higher data usage, though, along with the potential creepiness factor. 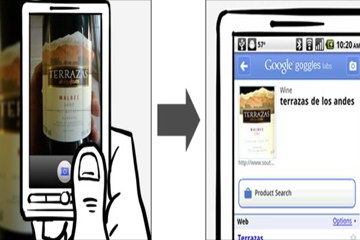 Wine labels are a pretty easy target for Goggles. Someday soon, it will probably be able to identify more difficult subjects such as plants, animals and much more.
Courtesy Google

Consider this: Some experts say that as much as two-thirds of the human brain is dedicated to processing the information we gather with our eyes. Imagine the enormous complexities involved in attempting to engineer processes that allow a machine to mimic that kind of brain power.

Goggles attempts this feat by analyzing images using various mathematical algorithms. Then it compares extracted information (called features) with its expansive image database to find any possible matches. Items with a lot of texture and recognizable feature points are recognized almost immediately.

As of this writing, Goggles is best for commonly photographed subjects. Capture an image of a Coke can or the Golden Gate Bridge, and you'll likely see an accurate description in your search results. Bright, colorful product packaging, for instance, is pretty simple to recognize. Less commonly known places and things aren't as easy for Google to discern.

Because Goggles relies on your smartphone's camera, object and text identification is sometimes harder than it should be. You can give Goggles a big assist by taking your pictures in good light, holding the camera steady and using a decent resolution setting. Grainy or blurry photos are a recipe for Goggles failure. To further improve results, Goggles has a feature that helps you crop the image, leaving the most pertinent (and recognizable) elements for analysis.

Even with proper picture taking, Goggles still needs work, which is why it's in the Labs (or experimental) section of Google's site. But as the science and technology behind visual search improves, you can expect to do a lot more searching with your phone's camera in the very near future.

Oh, I remember the old days -- when we all had to search the Internet using clumsy keywords, along with a dash of luck, to locate online information. Goggles heralds a new age, in which we merely have to point an electronic device at something that piques our curiosity in order to find out all about it.

Currently, Goggles relies solely on smartphone cameras to see the world around us. But in the very near future, another Google project, called Project Glass, could add to or replace the Goggles experience. This still-experimental project involves wearable, augmented-reality glasses. The glasses essentially replace your smartphone, showing you new-message notifications and calendar reminders, all while offering more information about the objects, businesses and landmarks in front of your eyes.

Both Goggles and Project Glass are signs of things to come. Before long, we'll take in as much of our world through digital eyes as we do through our analog ones.