Browse the article Are Facebook and Ford teaming up to make a social automobile? 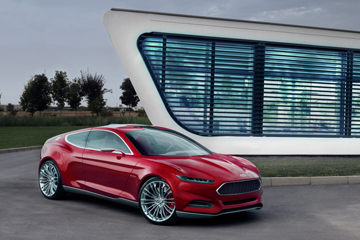 If you live some place where a car is essential for getting around, then you know just how much of your time can get sucked up in transit. That's time that, if you weren't stuck behind the wheel, you could be doing more fun or productive things: like scarfing down a juicy burger with both hands, showing some affection toward the person seated next to you...or perhaps most importantly these days, updating your status on Facebook.

Let's be clear, here. Fiddling with social media sites is the last thing you want to do while operating a motor vehicle. It could, in fact, actually be the last thing you do -- distracted driving is the culprit in 1 out of 6 fatal crashes [source: NHTSA].

But what if there was a way you could drive and get your Facebook fix on safely, automatically? Such a thing could be a reality in the not-so-distant future. We've written about how the Ford Evos concept car, unveiled in 2011, integrated "social" features into the driving experience. For instance, you could have your car wirelessly push an update to your friends about a particularly fun driving route to take (or maybe a lousy one that they should probably avoid).

And Facebook, as we know, hasn't been too shy about its plans for global online domination -- which it intends to achieve by being available any place there's a screen in front of your face.

So just what is going on? Is Ford working on a social media-augmented car with Facebook? After all, the two companies have been awfully chummy with one another publicly. They even went so far as to hold a nerdgasmically cool "Hackathon," starring engineers from each company in early 2012. When General Motors said it would be pulling its $10 million Facebook advertising budget in May of the same year because of disappointing results, Ford tweeted a nose-tweaking response to its automotive rival:

"It's all about the execution. Our Facebook ads are effective when strategically combined with engaging content & innovation," a Ford exec wrote in apparent reference to the flap [source: Bomey].

In the pantheon of poor judgment, in-vehicle social media might seem at first to rank right up there with invading Russia in winter, or wagering your 401(k) against IBM's Deep Blue in a game of chess. Like we mentioned, there's that itty-bitty "safety" thing to concern ourselves with. But let's just say, for the sake of argument, the engineers could find a way around that? How cool would it be if there was an app that allowed a group of friends in separate cars to find a couple of empty parking spaces near one another? Even in a busy downtown area, at mid-day?

No doubt about it, anything that causes you to take your concentration off the road increases your cognitive load. Once that load is high enough, you lose the ability to perform a task. If you don't believe us, try rubbing your stomach, patting your head, and jumping on one leg -- and texting -- all at the same time. Didn't think you could do it.

That's why programmers at Ford's and Facebook's February 2012 Hackathon at Facebook headquarters in Palo Alto, Calif., developed social media apps that mostly ran on their own.

Among the highly experimental apps they produced (overnight):

"The best of those ideas are now being further developed in Ford's Dearborn labs," Ford reports on its Ford Social blog. Ford already has a wireless information platform (called SYNC) that it uses to pipe in entertainment and concierge-like services to drivers. Integrating it with Facebook, if the Hackathon was any example, is well within reach -- technologically speaking.

Whether large numbers of car buyers actually want this stuff is hard to say. Comments from real Joe and Jane Consumers on the Ford blog run the gamut, from those who think it's brilliant to those who consider it a spike in organ donors just waiting to happen.

Ford project manager for SYNC Julius Marchwicki envisions a future where the car and the Internet connection enhance one another's capacity to bring friends together. He blogs:

"Imagine if SYNC could leverage all of the information from you and your friends put on your Facebook timelines to make your drive more personalized? By safely blending Facebook connections with the power of SYNC, Ford could extend the social experience and use it to once again revolutionize your time behind the wheel."

It appears Ford would rather port any Facebook-friendly applications it does create through SYNC and its customers' mobile phones, as opposed to building a dedicated "social" vehicle -- for the time-being, anyway.

In fact, Ford has said it will do exactly that, even giving instructions to potential app developers (besides Facebook) on how to go about partnering with Ford through SYNC.

"A typical customer will change his or her phone three times before changing a vehicle," Marchwicki is quoted as saying. "The way I look at it is, with tech like SYNC, people can update the way they interact with their vehicles without having to change their cars" [source: Quinnell].

Google is testing self-driving cars. Telematics technologies beam us drivers all sorts of information beyond what we can see through our windscreens: navigation, weather, traffic patterns, even movie times and dinner date reservations. It doesn't take a Doc Brown from "Back to the Future" to see where all this is headed. At some point, just like in the cyberpunk novels and movies, cars will simply be automated personal boxes that move us from one physical location to another. And while we're in those boxes, we'll do things we otherwise couldn't do while manually driving a car or while we're at work -- things like socializing, shaving, putting on make-up, reading, and of course, doing fun stuff online. Speaking of fun, once upon a time, driving was something people often did for the sheer pleasure of it. Now that it's become more or less a utilitarian function (for most people, most of the time) it makes sense to me that we would use technology to make more efficient use of that time.