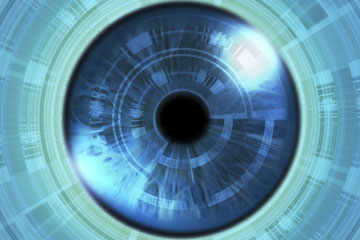 What if your contact lens were a computer?
Zap Art/Photographer's Choice/Getty Images

Contact lenses are amazing. Throw on a pair of these tiny, translucent discs and behold the world around you in stunning clarity -- with no clunky eyewear required.

But it's not enough just to see the world. How are we supposed to make any sense of it? Why a simple trip to the HowStuffWorks.com offices in Atlanta can raise some rather frightening questions:

"Why are all the streets named Peachtree?"

"If I get a cheesesteak sandwich at 'Gut Busters,' will it actually rupture my abdomen?"

"Is that subway rat eating a diaper?"

This is where the exciting technology of contact lens displays saves the day. Imagine a pair of lenses wirelessly connected to a wearable computer -- lenses capable of overlaying your perceived surroundings with information, warnings or even illusions.

A glowing arrow would appear to float in front of your eyes, telling you which Peachtree street to take or which meat sandwich to ingest. Advanced models might even hide the sight of that Huggies-munching rodent by substituting a more pleasing illusion -- such as kittens frolicking with a ball of yarn.

When did public transportation become so adorable?

So wash your hands. Wet your eyes. We're about to slip into the future with the emerging technology of contact lens displays. 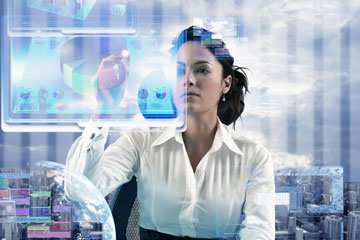 The Rabbit With Bionic Eyes

It can only power a single pixel, but that's just the beginning.
©HowStuffWorks.com

To be perfectly clear, the first rabbit to wear these high-tech lenses was somewhat dead at the time of the experiment. After all, what kind of maniac slips untested bionic contacts on a live rabbit? Not Babak Parviz, that's for sure.

Parviz is a bionanotechnology researcher at the University of Washington in Seattle. He's also the guy who led a team of U.S. and Finnish scientists in the development of these amazing prototypes.

Normal contact lenses are polymer discs crafted into just the right shape to sit comfortably on your eyeballs and correct vision. Parviz's lenses are quite similar, only they feature a few added components:

Parviz and his team encapsulated all of these parts inside a protective, biocompatible polymer. After three successful tests on rabbit cadavers, they slipped the lens on the eye of a live, sedated rabbit. They then used a remote radio frequency transmitter to activate the lens and watched the LED glow blue. If the rabbit were conscious, it would perceive this as a glowing, blue blur.

Follow-up examinations revealed no damage to the rabbit's eye, though the hard plastic contact would likely feel uncomfortable -- and would be usable only for a short time since it doesn't allow the eye to breathe. Also, while the researchers were able to power the lens from about 3 feet (0.9 meters) away outside the rabbit's eye, the distance narrowed to a mere inch when the contact was in place.

But that's how things begin: crude, somewhat painful but in proof of a larger concept. Just remember that back in the 19th century, some of the world's first contact lenses were actually made of glass.

Another remarkable contact lens prototype emerged in 2010, thanks to professor Jin Zhang at the University of Western Ontario. Zhang's experimental lenses change color with the user's glucose levels. See, the live cells on the surface of your eye contain many of the crucial biomarkers that doctors look to in the bloodstream.

In partnership with Microsoft Research, Parviz and his team also are working with contact lens display technology to create a single, biomonitoring contact lens.

Switzerland's Sensimed even has a single-use lens on the market called the Triggerfish that measures eye pressure over a 24-hour period to detect glaucoma. The Triggerfish transmits this data to a circular antenna taped around the patient's eye, which in turn connects to a battery-powered recorder.

These projects point toward a most remarkable future, one where high-tech lenses not only relay information from the computerized world, but also keep constant tabs on the conditions inside our bodies.

Will future generations take these for granted as well?
©HowStuffWorks.com

So what does the future hold for contact lens displays? For starters, expect more than one pixel and pixels you can actually see. Remember, the single pixel in Parviz's prototype would appear to the wearer -- human or otherwise -- as a blur.

See, the human eye can't focus on objects closer than 4 inches (10 centimeters) from the surface of the cornea [source: Parviz]. So Parviz hopes to incorporate even smaller microlenses, positioned in the lens between the eye and the pixel, which would make the clear pixel appear to float about half a meter away.

Parviz also hopes to use passive lenses, as these would require less energy than the current active lenses require. Consider the prototype worn by the rabbit. Outside energy was required to light that single blue pixel. But light constantly enters the eye as we perceive the world around us -- light that could be used in single- or multipixel contact displays. You don't need a flashlight to read a book or an Amazon Kindle on a sunny day, do you? The same principle applies here.

From here, it's easy to imagine a future in which contact lens displays use an augmented reality experience to layer our world with all of the informational, entertaining distractions that a smartphone provides today. Want to catch the latest sports scores while appearing to watch your daughter's dance recital? Done. Puzzled by a familiar-looking stranger on the train? With a little facial recognition software and a nod-activated Web search, you're just seconds away from a positive ID.

With the ability to monitor biomarkers on the surface of your eye, lenses of the future may supply a steady stream of up-to-the-second health data. If you find yourself in a hospital emergency room, a quick scan of your contacts will tell emergency responders all they need to know.

But enough about health monitoring. What will TV be like? The U.S. company Innovega predicts that within a few years contact lenses will work in congress with our television sets to focus 3-D screens directly into our eyes.

Still other futurists point to the reality-warping possibilities that contact lens displays offer. In accessing the technology awaiting us in 2030, futurologist Ian Pearson predicts an age in which hotel guests will use augmented reality to change the appearance of their sex partners, virtually redecorate the room and allow them to enter a lucid dreaming state.

That flashing blue light you're seeing? That's your contact lenses telling you that this is all a dream -- and it's time to dream something even better.

I first started wearing contact lenses in high school and, at the time, they seemed magical. Suddenly, I was free of the eyeglasses that had helped seal my nerd status among the bullies and jocks of junior high school. Never mind that I went ahead and obsessed about "Magic: The Gathering," H.P. Lovecraft and sci-fi movies anyway.

Here's a closing thought: What happens if you wear a pair of high-tech lenses inside-out?