What is the Board of Awesomeness? 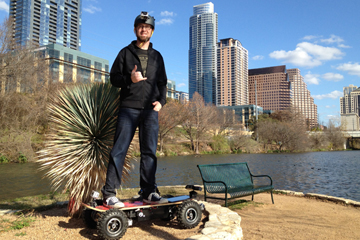 The Board of Awesomeness
Courtesy of Chaotic Moon

If a company makes a product with a name as audacious as "The Board of Awesomeness," it had better be pretty, well, awesome. Not just decent, good or great, but truly awesome. Thankfully, with features like video recognition, speech recognition, and accelerometers, this is one very awesome skateboard.

You read that right -- a skateboard. What, were you expecting these to be features on the latest smartphone, tablet or video game system? While it may indeed be a motorized skateboard, the innovative Board of Awesomeness incorporates technology from all of those devices.

Developed by Chaotic Moon Labs, a maker of mobile apps (from their Web site: "We are smarter than you."), the Board was unveiled to much fanfare at the 2012 Consumer Electronics Show. The board's "brain" is a Windows 8-equipped tablet, and it uses the motion-sensing Microsoft X-Box's Kinect as a control system [source:Chaotic Moon].

Here's how it all works: A Kinect sensor sits on the front of the board, facing up toward the rider. When you step onto the board, the sensor detects your hand and body motions, which you use to get moving and control your direction. Pushing forward with your hands gets things going, and pushing back slows things down. Like any skateboard, you lean from side to side to corner. With the 800-watt electric motor powering the wheels, you can skate at speeds of up to 32 miles per hour (51.5 kilometers per hour) -- pretty fast for a skateboard [source:Boxall].

All of this happens while the aforementioned Windows tablet records your data using GPS and a video camera. The touch-screen tablet is also used to turn the board on and off and to augment speed settings. It comes with voice control, too. Chaotic Moon describes the skateboard as "a super fun way for us to show how perceptive computing can change the way we look at user experiences" [source:Chaotic Moon].

Want to buy one? Of course you do. Unfortunately, Chaotic Moon seems to have no plans to sell the Board of Awesomeness at the moment, which is a shame for those of us whose lives are currently lacking in the awesomeness department.

However, the board was such a huge hit that the company came out with a new creation about a month later called the Board of Imagination. You don't have to use your hands on this one because it reads your mind instead. Yes, that's correct -- the board is controlled by your brainwaves, which are picked up by a special headset that turns your thoughts into motion [source:Gorman]. And what could be more fun than a mind-controlled skateboard?

I'd buy one of these. I think motion- and mind-controlled devices will become a lot more prominent in the future, whether it's on the devices we use or the vehicles we drive. Doesn't it all sound a lot more intuitive than hand controls?