by Nathan Chandler
Prev NEXT
3 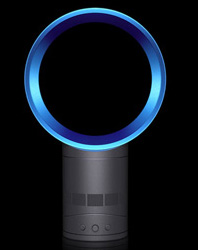 It may look strange, but the introduction of the Dyson Air Multiplier means house fans will never be the same.
Courtesy of Dyson

Although the awesome power of handheld gadgets makes them irresistible, this great new product isn't even remotely sized to fit your palm. It's the Dyson Air Multiplier, one of the funkiest window fans ever to hit planet Earth.

House fans have remained unchanged for what seems like forever. They all use the same chopping blades to move air around a room. It's effective, but the air is turbulent and uneven.

Dyson's Air Multiplier doesn't have any visible blades. It appears to be simply a circle on a short base. The base draws in air, forcing it upwards into the circle (called a loop amplifier) and then pushes that air out through openings in the loop. As air exits the loop, it pulls along air surrounding the sides of the loop, thus the multiplying effect. Dyson's engineers got the idea for their Air Multiplier from research that resulted in Dyson's hand-dryer technology. They realized that they could use similar technology to create fan-worthy air flow.

Because the Air Multiplier doesn't have exposed blades, there's no ugly safety grill, either. As a result, you won't have to stare at huge dust bunnies that accumulate on the blades of a traditional fan. The grill-less design also freed product designers to create a more graceful look, and the Star Trek-worthy aesthetics of the Air Multiplier is undoubtedly one of its most potent selling points. Dyson is surely hoping looks count for something -- the Air Multiplier starts at $300.