Browse the article 5 Awesome Gadgets That Never Made It 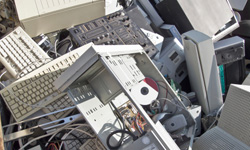 Which awesome gadgets join these electronics on the scrap heap?
iStockphoto/Thinkstock

When I go to CES -- that's the Consumer Electronics Show in Las Vegas, Nevada -- I like to pretend I'm Indiana Jones exploring ancient ruins. Each step could bring me to a new adventure. Whether it's sneaking into a booth demonstration to catch a glimpse of a gadget prototype or dodging out of the way of a horde of hungry journalists rushing a buffet table, I'm ready.

Another similarity between me and Dr. Jones, apart from the fedora I insist upon wearing while at the convention center, is that we're used to nearly getting our hands on something special only to have it ripped from our grasp at the last moment. For Indiana, it was the statue that Belloq stole. For me, it's a collection of devices that, despite their initial impact on the show floor, either fizzled out in the market or never even made it to store shelves.

A few trips to CES will teach you how to keep your enthusiasm in check. Here we have a collection of some of the coolest gadgets I've encountered that subsequently disappeared under mysterious circumstances. 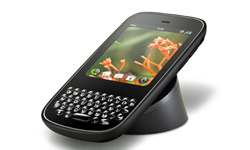 The Palm Pixi was the successor to the Pre but neither phone managed to keep Palm afloat.
Courtesy Palm

Back in 2009, the buzz on the CES showroom floor was about a new smartphone poised to take on the Goliath known as Apple's iPhone. It was the Palm Pre, a device from a pioneer in the personal digital assistant (PDA) market. It had a sleek design and a snappy operating system called WebOS. It looked like a winner.

A quick search for videos from 2009 will show how impressed journalists were at this new smartphone. Everyone wanted a chance to play with the device -- Palm was very careful to keep interactions to a bare minimum because it wasn't quite ready for the market. And that's where we get into a problem.

The Palm Pre didn't actually make it to stores until June of 2009. That's six months between causing a stir at CES and becoming available. By then, the buzz had died down to a murmur. Palm struggled to drum up a new round of excitement, but ultimately the smartphone fizzled. Palm itself wasn't in the best position financially -- HP would buy the company in 2010 and dissolve most of Palm by 2011.

Another device that first caught some attention at the 2008 CES really got people excited in 2009. It was the LG Watch Phone. It featured a touch-screen interface and Bluetooth connectivity. You would be able to make and receive calls and texts from the watch. Comparisons to Dick Tracy's radio watch soon followed.

While many people seemed intrigued by the idea -- even those who questioned the practicality of such a device -- no one was able to get a straight answer from LG as to the watch's price or availability. It would eventually go on sale in the United Kingdom for around 500 pounds, exclusively though the cell phone service provider Orange.

The excitement around the watch died down in the United States. Today, several smart watch devices compete for a market that may not even exist. 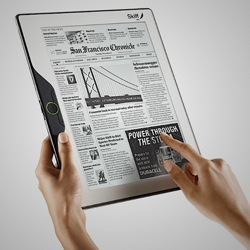 The Skiff Reader would have been a large e-reader device that would compete with gadgets like the Amazon Kindle but it never made it to store shelves.
Courtesy Skiff

At CES 2010, a company called Skiff showed off a prototype of an e-reader device that had a thin steel foundation. It had a touch-screen interface, was flexible and with an 11.5-inch (29.2 centimeter) screen it gave the user the feeling of holding a sheet of paper.

It seemed like a compelling product. It was easy to imagine reading newspapers or magazines on the device. It lacked the bulk of other e-readers and it looked great. So what happened?

News Corp, the company owned by Rupert Murdoch, bought Skiff in 2010 and then promptly dismantled the hardware division of the company, which it wasn't interested in. And so, another interesting device slipped through our fingers.

The Lenovo U1 IdeaPad

I saw a prototype for this computer-tablet hybrid back in 2010. The concept was novel at the time -- at first, it looked like a standard, notebook-style laptop computer with a colorful plastic case on the back of the screen. But then, a Lenovo representative took the screen and popped it off the keyboard. Presto! It was a tablet!

The tablet and the laptop ran on two different operating systems. Originally, the tablet used a derivative of the Linux operating system. In 2011, Lenovo brought the U1 back out with a new tablet OS: Google's Android. When in laptop mode, the computer ran on Windows 7.

Lenovo had some cool ideas for the U1. Ideally, you would be able to continue consuming the same content while going between form factors. If you were watching a video on your laptop and then popped the screen out, the tablet would pick up right where you left off, even if that meant initiating a new program to launch the video.

Unfortunately, the Lenovo U1 never made it to the United States. The tablet, known on its own as LePad, launched in China. Today, several manufacturers offer various combinations of laptops and tablets -- the U1's chance to grab the spotlight has faded away. 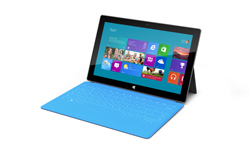 Microsoft announced the Surface tablet in June 2012. Could it succeed where the Courier faltered?
Courtesy Microsoft

This one is cheating -- the Courier never made it out to the CES exhibition halls. The tablet concept from Microsoft took a different approach. It opened like a book with screens on both the left and right. You could use one screen to display information while jotting notes on another. You could flick content from side to side. It looked like a tablet designed to aid productivity.

But apparently, Microsoft never intended to acknowledge this concept. It was an internal project that leaked to the public. Journalists jumped on the information -- the concept video showed a tablet running a new operating system. It didn't look like Windows Mobile. Could it be a hint of where the company was headed?

In 2010, Microsoft officially canceled the Courier project. But some of the design elements seemed to reappear in the Windows Phone operating system and later in the Metro design for Windows 8. Could we one day see the return of the Courier? Hope springs eternal!

I've learned through bitter experience not to get too excited by the things I see at CES. Sometimes the gadgets on display are just there to give us a hint at what is possible. Or it may be that the companies are judging which features they should concentrate on based on the buzz generated on the show floor. Or it may even be that the company itself isn't on firm enough ground to deliver upon its promises. Whatever the reason, I now try to repress my urge to gush about every gadget I see. I have limited gushing to every other gadget, which I suppose is progress.