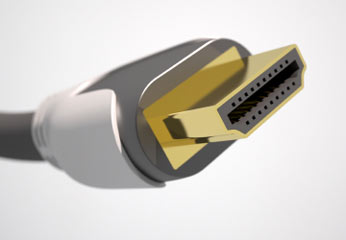 If you decide to buy a HD video projector, you'll need an HDMI cable long enough to reach from your output source to the projector.
©iStockphoto.com/luismmolina

A high definition (HD) video projector has an aspect ratio of 16:9 (1.78) or higher and projects at a resolution of 1920 by 1080 or higher. Many video projectors will support HD video, but only those with a resolution of at least 1920 by 1080 will project with HD quality. You'll also need to budget for a sufficiently long HDMI cable to connect the video source and the projector. Even if the projector supports VGA, DVI or other video cables, you'll need HDMI to ensure the data going to the projector remains at the 1080p or 1080i level.

While projectors for large venues often reach HD quality, most of the video projectors researched in late 2011 for this article were for home theater use. These HD video projectors have a wide price range, from around $200 on the very low end all the way up to $7,500, though most fall between $600 and $3,000. The most noticeable contributor to the price is the contrast ratio. At the extremes, the most inexpensive model found in our research had a contrast ratio of 600:1 while the $7,500 model was 50,000:1. Generally speaking, the difference in price is roughly proportional to the difference in contrast ratios.

Features that address throw distance challenges or improve the projected image also contribute to the quality and price differences in projectors. For example, one higher-end projector researched for this article had a 2x motorized zoom lens, allowing for a wider variance in throw distance than many other models. Also, some projectors include the latest projection technologies of Digital Light Processing (DLP) or Liquid Crystal on Silicon (LCoS) rather than the cheaper, more common Liquid Crystal Display (LCD) technology.

Setup and maintenance costs for an HD video projector will be similar to those without HD capability. For setup, this includes buying a screen and mounting mechanism. For maintenance, this includes lamp and filter replacements and replacing batteries in remote controls. The one exception is the additional cost of an HDMI cable if you don't already have one. HDMI cables typically cost more than VGA, component and other video cable types.

Now that you know HD, how about the newer 3-D technology? Let's check out 3-D video projectors next.