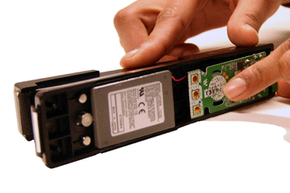 When Bob Dylan wrote about the times that were a changin' way back in 1964, he was referring to social change. The same could be said today about change in social media. Surprisingly, even an iconic throwback like Dylan has a Twitter account -- proof that the social media boom has reached nearly every corner of popular culture. These days the line between what should and shouldn't be shared from a person's personal life has become blurred. Couples broadcast intimate details about their love lives on Facebook. Celebrities and average joes alike tweet about everything from what they had for breakfast to the quality of their latest bathroom experience.

Aside from the drivel, there are also privacy issues at stake, with parents innocently posting pictures of their children for all to see, or announcing vacation plans so every seedy character in the neighborhood knows exactly when a home is left unattended. Some users may have a full understanding of how social media works and its implications. But others may not realize just how much they're opening their lives up for the perusal of strangers. When it comes to sharing on social media sites, there are few rules. That's why in an instant you find out what movie Ashton Kutcher and Demi Moore saw last night or where Shaquille O'Neal is currently "chillin'."

With the invention of the Twapler, things have either reached a new high or new low, depending on which side of the social media fence you fall on. What exactly is the Twapler? It's an invention by a pair of Silicon Valley entrepreneurs -- a stapler that automatically sends a message via Bluetooth or WiFi to a Twitter feed detailing exactly what you're stapling at any given moment. Whether you're joining together a research project, tax forms or your divorce papers, the Twapler will send out a message for eager tweeters to revel in.

We'll take a look at how this new invention works, the inspiration behind it, and the potential marketability (or lack thereof) on the following pages. 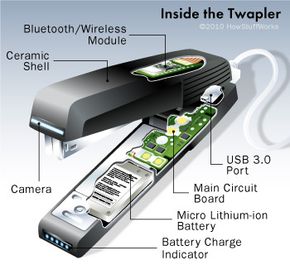 Developing the Twapler was no small task for inventor/entrepreneurs Saul Fishel and Abhijay Asrani. The pair met while working in the research and development department of nanotechnology giant Small Miracles, LLC, in Silicon Valley, Calif. In order to serve up an auto-tweet directly to a Twitter account, the duo knew that the Twapler must incorporate a few key components. The first thing the high-tech stapler requires is a front-mounted camera that can read the first 140 characters, the Twitter limit, of the page that's being stapled.

Thanks to their work in nanotech, they had experience with fiber optic cameras and developed a patent-pending new lens small enough for the stapler's front end, yet sturdy enough to withstand up to 5,000 depressions without a degradation in quality. Each time a staple is ejected, a switch inside the Twapler head sends a signal to the camera to take a snapshot of the head of the page.

Once the image is captured, the information is digitized and sent to a computer chip with built-in optical character reader software. From there, it's pretty simple. That translated message is sent to your home computer or cell phone with the help of a Wi-Fi antenna or Bluetooth device. As with the camera, both are small enough to fit snugly inside an interior casing protected by a thin, unbreakable ceramic outer shell. The Twapler team modeled the casing on ballistic vests because of the delicate nature of the equipment and the pounding that the average stapler takes over the course of a lifetime.

Once the computer or cell phone receives the message, it utilizes proprietary software developed with the assistance of Twitter to use optical character recognition (OCR) to convert the image to text. The software sends the first 140 characters out for consumption by whoever is following the Twapler feed. The Twapler account is like any other Twitter account, except for the method in which the messages are entered for tweeting out into the ether.

The Twapler is loaded with a micro lithium-ion battery pack as well as a built-in USB 3.0 port. This allows users to recharge the battery through a home computer and activate the account using the computer's software. Once the Twapler has been set up with the computer or laptop, it becomes Bluetooth enabled, so a cell phone is all that's required. If you're wondering about the size, the Twapler weighs just three ounces more than a comparable stapler and is no larger dimensionally.

To learn about the inspiration behind such an unusual invention, click ahead to the following page. 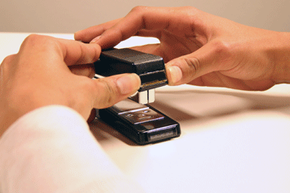 To understand the inspiration behind the Twapler, one need not look any further than the heritage of developers Fishel and Asrani. Fishel's father Herschel founded the Fishel Stapler Co. in Fresno, Calif., at the age of 22 after he emigrated from Israel with few prospects for work and a young wife in tow. The company took some time to get on stable ground, but by the mid 1970s, it was the largest supplier of staplers and staples to the central California. On the tech side, it was Asrani's father who provided the knowhow. Sanjeep Asrani was among the first civilian developers of the Internet, working as a student assistant alongside Leonard Kleinrock in the 1970s. Kleinrock was a UCLA professor who pioneered the concepts of packet switching and hierarchal routing, the basic technologies behind the Internet.

With these backgrounds ingrained in Fishel and Asrani, it's not a surprise that the Twapler was born one day after a frustrating experience in the copy room of Small Miracles. The story is that Fishel and Asrani were burning the midnight oil trying to finish up a presentation that was due the following morning. Between trips from the research lab to the copy room, the pair found themselves wasting too much time running back and forth to update the other about the status of the presentation booklets. Eventually, it occurred to Asrani that if he were able to somehow send a message indicating what he was stapling back to Fishel, they could save time and get the presentation ready in short order.

After the initial brainstorm, Asrani and Fishel decided that in an era in which so much is shared via social media, it made sense to integrate the Twapler into the information superhighway. They believed that it would saves users the time they would normally spend tweeting out what they were stapling the old-fashioned way, with a clunky cell phone keyboard and two meaty thumbs. Fishel explains it this way. "Instead of posting on Facebook or Twitter that you're stapling together your tax forms, you can just let the Twapler do the work for you." This is evidenced in the initial test tweet the Twapler team posted:

And with that simple message, the Twapler was born. Both Fishel and Asrani believe that the sky is the limit for this new and exciting technology. Whether it will have broad appeal remains to be seen. Beta models of the Twapler are due to go out to a random selection of office complexes in the spring of 2010. Based on the results of the Beta testing, Twapler 1.0 could make its way into your lives and hearts as soon as fall 2010.

For more information on stapling and Twitter, please visit the links on the following page. 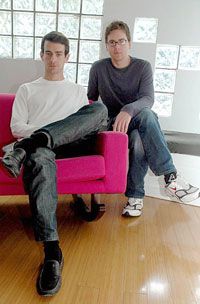 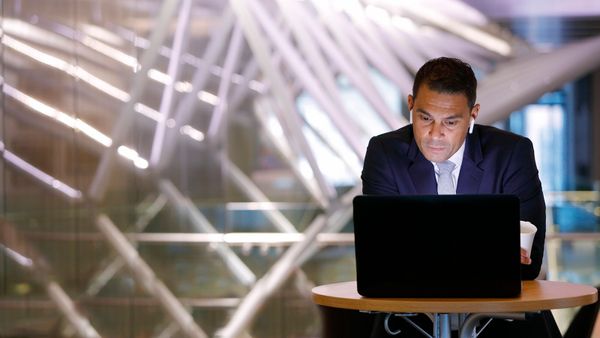 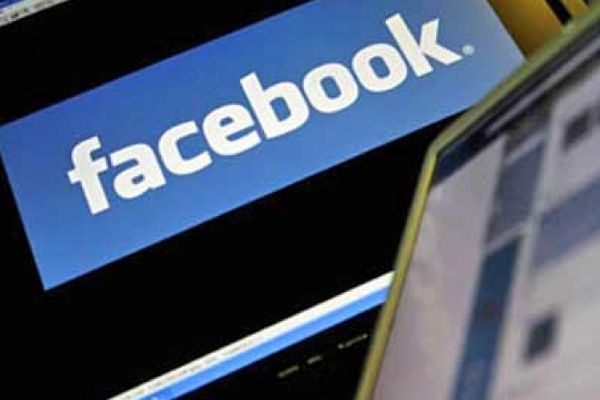