Can We Avoid Machines Taking Over? 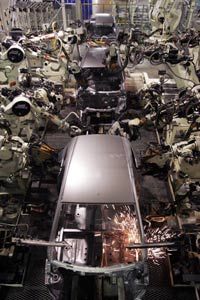 We can use robots to perform repetitive tasks automatically, but will we engineer all humans out of a job?
Hana Kalvachova/isifa/Getty Images

Not everyone thinks we're destined -- or doomed -- to reach the singularity detailed in Vinge's essay. It might not even be physically possible to achieve the advances necessary to create the singularity effect. To understand this, we need to go back to Moore's Law.

In 1965 Gordon E. Moore, a semiconductor engineer, proposed what we now call Moore's Law. He noticed that as time passed the price of semiconductor components and manufacturing costs fell. Rather than produce integrated circuits with the same amount of power as earlier ones for half the cost, engineers pushed themselves to pack more transistors on each circuit. The trend became a cycle, which Moore predicted would continue until we hit the physical limits of what we can achieve with integrated circuitry.

Engineers and physicists aren't sure how much longer this can continue. Gordon Moore said in 2005 that we are approaching the fundamental limits to what we can achieve through building smaller transistors. Even if we find a way to build transistors on a scale of just a few nanometers, they wouldn't necessarily work. That's because as you approach this tiny scale you have to take quantum physics into account.

­It turns out that when you deal with things on a subatomic scale, they behave in ways that seemingly contradict common sense. For example, physicists have shown that electrons can pass through extremely thin material as if the material weren't there. They call this phenomenon electron or quantum tunneling. The electron doesn't make a physical hole through the material -- it just seemingly approaches from one side and ends up on the other. Since transistors control the flow of electrons like a valve, this becomes a problem.

­If we hit this physical limit before we can create machines that can think as well or better than humans, we may never reach the singularity. While there are other avenues we can explore -- such as building chips vertically, using optics and experimenting with nanotechnology -- there's no guarantee we'll be able to keep up with Moore's Law. That might not prevent the singularity from coming but it might take longer than Vinge's prediction.

Another way to prevent the singularity includes building in safety features before machines are able to become self-aware. These features might even resemble the three laws of robotics proposed by Isaac Asimov. But Vinge counters that argument by pointing out one detail: if the machines are smarter than we are, won't they be able to find ways around these rules?

Even Vinge doesn't go so far as to say the singularity is inevitable. There are plenty of other engineers and philosophers who think it's a non-issue. But maybe you should think twice before you mistreat a piece of machinery -- you never know if it'll come after you for revenge later down the road.

To learn more about our future computer overlords and other topics, take a look at the links below.

Moore's Law isn't a hard-and-fast rule, nor is it governed by nature. It's a self-fulfilling prophecy. Semiconductor manufacturers push themselves to keep pace with the law, which makes the law an accurate prediction.­