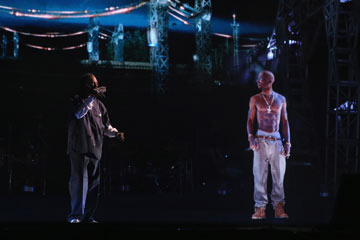 The big news at the 2012 Coachella music festival was the live-action Princess Leia-style "hologram" of Tupac Shakur -- who was shot to death in 1996 -- that took the stage to duet with Snoop Dogg on a couple of songs. Now, of course, the discussion has moved on to possible concert tours with other dead people, reproductions of the technology using Marilyn Monroe, Ronald Reagan and host of other celebrities. But most people didn't understand what they were really looking at.

It makes sense that people would call it a hologram, and there's a case to be made here for linguistic drift -- if it looks like the holograms we know from media and childhood, and works just like them, then what's the point in splitting hairs? -- but the real story is more complicated and, to my mind, more interesting. A true hologram is a system of projected images that changes with the angle from which you look at it, just like a real object would. While Snoop interacted with the Tupac avatar onstage in such a way as to give the illusion of three dimensions, it was really just a two-dimensional optical illusion -- and not only that, but one first invented in the 1860's!

There are two parts to the illusion: first, the computer program created by the Oscar-winning Digital Domain Media Group, which worked with Dr. Dre to create a perfect simulacrum, or likeness,of the deceased rap star. Digital Domain is the leader in the field of this sort of computer-generated imagery, and has done similar posthumous reconstructions for several unnamed corporate clients.

The company took physical images and video movement from footage of the rapper when he was still alive, got input from Tupac's friends and colleagues on the realism of the animation, and finally created an all-new video recording of a performance that never happened. In fact, when the ghost first appeared, he saluted the Coachella crowd by name, despite having died three years before the annual festival even started.

And the second part of the illusion? Read on to find out how the Coachella audience was artfully deceived by a projector and a reflection. 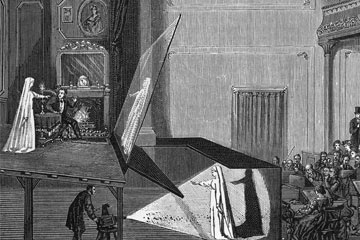 Birthdays, accomplishments, any special occasions were, for me, chances to ask for a trip to the science museum. From Phoenix to Albuquerque to Houston and San Antonio, my trips to health and science museums across the southwest are some of the best memories of my childhood. To this day, I still love animatronic dinosaurs and hope one day to own an army of them -- but my favorite up-close exhibits were always the ones that used the Pepper's Ghost illusion to transform my face into something else (an ape's face, usually) with hand-operated lights and mirrored glass. They're scary and funny, and because the physics behind the illusion are so strong, just as visceral and fascinating 20 years later as they were when I was a kid.