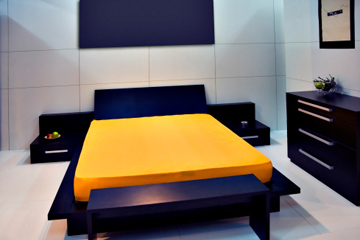 Ideally, an intelligent reactive environment would anticipate your needs while the technology itself fades into the background.
iStockphoto/Thinkstock

The dream of the intelligent house that anticipates the needs and desires of those living within it has been popular in entertainment circles for decades. From the Tex Avery cartoon "The House of Tomorrow" to SARAH, the bunker in "Eureka," smart houses in entertainment have promised to make our lives easier, more enjoyable or at the very least interesting.

What's really cool is that reality isn't that far behind fiction. There are products on the market today that could easily be part of a fully automated, intelligent home. And it's not just domestic life that's getting the AI overhaul. The workspace of the future may also adapt according to the needs of those working within it.

Whether or not we create a future with intelligent environments is no longer the question. Today, the questions include what form it will take, which technologies will serve as the foundation and which company's brand name will be stamped on nearly every electronic device you can imagine!

The goal will likely remain the same -- create personalized custom experiences for each person who lives or works within an environment based upon that person's preferences. It's easy to explain with an example.

Let's say that I'm living in a world in which intelligent reactive environments are common. I have profiles that inform the environments of what I prefer when I'm at work or at home. When I'm home, my house's sound system kicks in with some soothing punk rock music from the '70s. The music follows me from room to room, shutting off as I leave one part of the house and cueing up as I enter another. Meanwhile, the house's climate-control system adjusts for my preferences -- I like it nice and cool in my home, so the air conditioning kicks in.

At work, it's a different story. My workstation begins to play classical music through a set of headphones -- I don't listen to music with vocals while working, as I find it too distracting. My office phone knows my voice, letting me dial in to conference calls with a vocal command. When I'm done for the day, the lights shut off over my desk, conserving energy.

That's just scratching the surface of what intelligent reactive environments may be able to do for us. But to really understand how great a challenge it is to design one, we need to take a closer look at artificial intelligence itself.

The Anatomy of a Smart Home

Whether it's a fully integrated house filled with interactive devices or a single component within an environment, there are three main pieces to creating an intelligent reactive device. First, it has to be able to detect what is going on. We humans use our senses to gather information about the environment around us and the others who may be in it. Sensors do the same thing for electronics, though a sensor may have a narrower scope of stimuli it can detect.

The final piece is some sort of actuator, switch or setting that the processing unit engages to change the environment to best suit the user's needs. This might be a thermostat setting, a sound system or even a haptic feedback system that alerts you to specific conditions.

An interactive environment could have a central processing unit through which all components operate. This would allow for a single point of operation. All the data gathered by sensors would pass through the processing unit, which would send out commands to adjust the environment as needed.

Another approach is to use multiple, independent systems within an environment. This means that you might have an intelligent thermostat and an intelligent sound system but the two aren't connected to each other. One potential advantage of this approach is that if one component's processing unit fails, the others should still work without a problem. Interactive environments may also use a combination of systems with some integrating with a central unit while others are independent.

In the early days of intelligent environment design, you had to carry around some sort of identifiable token or card containing an RFID chip for a system to recognize you. The RFID chip would link to your personal profile and the environment would adjust as necessary. But today, facial-recognition systems and devices like the Microsoft Kinect have advanced to the point where computers can recognize us without the need for an electronic nametag!

Teaching Environments to be Smart 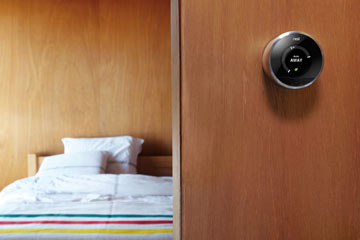 The Nest Learning Thermostat is an example of a component you might find in an intelligent reactive environment.
Courtesy Nest Labs

Artificial intelligence is a field of study that's nearly as old as computers themselves. Over the last few decades, computer scientists have made great strides in artificial intelligence -- so much so that sometimes, computers seem to possess true intelligence the way we humans do. Researchers at Cornell University designed a program that extrapolated the laws of physics just by observing the movements of a swinging pendulum over the course of 24 hours. How could a computer figure out something in a day that took us hundreds of years to sort out? It's because computers are good at analyzing massive amounts of data and matching up patterns.

Today's intelligent reactive devices are like that -- they learn from patterns. Let's look at a thermostat as an example. Let's say your ideal temperature is 70 degrees Fahrenheit (21 degrees Celsius). When you're home, that's what you want. But let's say you're away from your home during the day. You may not care if your home gets a little warmer or cooler than 70 degrees at that point. So you set the thermostat a little higher -- or lower, depending on the time of year -- than your normal comfort zone to save power. When you come back home, you reset the thermostat and wait for your house to get comfortable again.

Many modern thermostats have a programmable mode that lets you set temperatures for particular times during the day. You could program your thermostat to adjust to a different temperature after you leave and return to your preferences an hour or so before you get back. You'll still be saving energy, but you won't have to come home to a hot -- or cold -- house.

An intelligent reactive thermostat could learn these patterns by recording when you make adjustments to the temperature. If you make a pattern of adjusting the temperature -- for example, if you like it toasty in the morning but cave-cold in the evening -- the intelligent thermostat can keep a record of it and make these adjustments for you once it has figured out your preferences.

The Nest thermostat does just that. It also has a motion detector built in so that it can adjust these settings on the fly. Maybe you've got a day off -- something a normal programmable thermostat would be unable to determine. The Nest could detect you as you move about the house and make sure to override its normal routine so that you remain comfortable.

The Nest also has a WiFi transmitter that allows it to check weather reports. This lets the system know if it will need to work harder to maintain the ideal temperature inside the house. This adds a second layer of artificial intelligence over pattern recognition -- search and learning.

The thermostat is a comparatively simple application of an intelligent environment. In my case, the system may have a command that resembles "if Jonathan is home, then set the thermostat to 70 degrees Fahrenheit." But not all reactions are simple if-then problems.

For example, you might have a favorite chair you sit in. Sometimes you sit there when watching television. Other times you might be reading or listening to music. In a fully automated home, sensors might be able to determine when you sit in the chair. But what does the home do next?

In general, the way AI makes decisions involves sets of actions. When you watch television, those actions could include turning on the TV and any other home entertainment equipment you have. It may also involve closing the blinds to block outside light. You might like to watch movies in a dark room, so the house dims the lights inside as well.

But if you wanted to read a book, a dim room with a blaring television may not be the environment you had wished. Instead, you might want a nearby lamp to be on while you sit in a quiet room and read. In this case, the house would need to turn off any gadgets that make noise and turn the light on for you. But how does the house know which set of actions to follow?

It sounds like a simple problem -- after all, you know if you want to watch TV, read or listen to music. But the house has to learn. It might do this by observing your behavior over several days, looking for patterns and patterns within other patterns. Otherwise, it might turn on the lamp when you really wanted the television.

This is mainly a software problem. Programmers help AI become smarter by building in a feedback system so the program keeps track of how frequently it gets things right and wrong. It gradually builds a database keyed to your behaviors so that it can anticipate your needs based on past experience. It may still get things wrong once in a while.

Things get more complicated when there are multiple people living in one house -- or working in the same building. The software for the intelligent environment will have to build databases for each person and tweak them over time. And then there's the question of prioritization -- if two people have drastically different preferences, how does the intelligent house take that into consideration?

The good news is that there are dozens of different universities, companies and research organizations working on creating an intelligent reactive environment. While it may be years before anyone creates a standardized approach, we'll likely see intelligent appliances and gadgets make their way into our homes in increasing numbers soon.

The basic assumption underlying intelligent environment design is that people are largely creatures of habit. But a good design must also be able to adapt to both gradual changes in behavior as well as more sudden departures from routine.

I've been fascinated by the development of intelligent environments. We're just in the infancy of smart homes and smart appliances. I look forward to the day when my appliances know what I want before I do -- it'll save me a lot of time as I stare into the fridge wondering what I want to make for dinner.