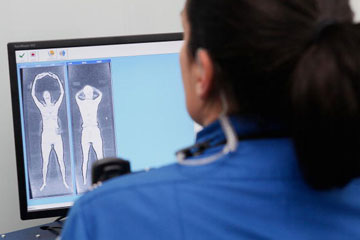 There's been plenty of criticism of backscatter scanner technology, especially from privacy- and public health advocates. In response, the TSA has tweaked the scanners to keep bad press at a minimum and make fliers feel more at ease.
Scott Olson/Getty Images

The privacy concerns are obvious: Few travelers would look forward to a backscatter screening knowing that security employees were seeing what amounts to a naked picture. That's true even though the TSA says the images are immediately deleted and that the employees doing the screening are in a remote location and not near the security checkpoint, and thus, can't see the people they're screening. With the screeners located far away from the people being scanned, the TSA hopes travelers will feel less like they are being violated visually.

This strategy is also designed to defuse arguments about racial profiling. Because the screeners can't see skin color or clothing, they aren't influenced by preconceptions about the person standing in front of the scanner.

Still, for most travelers, it's no small detail that the scanners create a nearly naked picture. To minimize the visual intrusiveness of these scans, the TSA is testing a few scanners using updated software, which projects a cartoon-like image of the person in question. Suspicious items are highlighted in a similarly generic way, letting the authorities pinpoint people who may require further screening in the form of a pat-down.

So far, backscatter scanner privacy issues haven't blown up into major problems for the TSA in the way that enhanced pat downs, or aggressive frisking, did. But there is still plenty of opposition to these so-called strip search scans.

The ACLU (American Civil Liberties Union) argues that the scanners hold potential for humiliation. Not only are subjects stripped bare, but people with private medical equipment, such as colostomy bags, may be subjected to unnecessary searches. The group says that backscatter X-ray scanners should be used only when absolutely necessary, not systematically applied to a predetermined ratio of travelers passing through security gates.

In Britain, there are concerns that the scanners may breach child pornography laws. As a result, British travelers under the age of 18 were allowed to bypass the scanners. Some religious leaders have opposed the scanners as well, saying that the resultant nude images violate their beliefs.

But privacy is just one part of the anti-scanner argument. Some people worry about the effect of scanners on human health. Find out why on the next page.