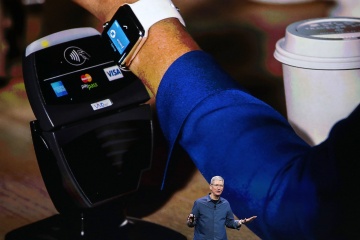 Will the Apple Watch and its tap-to-pay feature capture the hearts of consumers the way other tech from the company has?
©Justin Sullivan/Getty Images

The Apple Watch starting price will be $349 for the base model [source: Apple]. There's no word yet on how much the higher echelon models and luxury watch bands will cost, but there's industry speculation that the Watch Edition 18-karat gold models could be anywhere from $1,200 to $10,000 [sources: Biggs, Murphy, Taylor]. Premium timepieces that aren't mini-computers can be priced in that range or much higher, so those price points are not out of the question. But only Apple knows for sure. Apple Watch will become available in early 2015.

Some smartwatches have already beaten Apple to market. The Samsung Galaxy Gear (which requires a Samsung phone), the Motorola Moto 360 (which requires an Android phone) and the Pebble (which works with iOS and Android phones) seem in some ways comparable to Apple Watch. All require a smartphone with which to communicate, all can get notifications to you and all run a variety of apps. Gear and Moto have heart-rate monitors for fitness tracking and Pebble will keep track of your steps. Google's Android Wear is an operating system for smartwatches that's already been incorporated into the Moto 360, Samsung's Gear Live and the LG G Watch. So far Apple Watch is the only one that integrates NFC, so it will be the only one that allows payments via smartwatch for now.

Smartwatches haven't yet caught on as must-have consumer tech items, though. A survey conducted by Canadian firm RBC Capital Markets reportedly found that only 11 percent of respondents who are planning to purchase iPhone 6 or 6 Plus are also planning to buy an Apple Watch [sources: Booton, Dormehl]. But interest could increase as more and more people get the newer phones and start playing with iOS 8 and some of the apps that would integrate with the Watch. It could also increase as the Watch hits the market if positive reviews follow.

This won't be the first time Apple has ventured into an arena where there appeared to be little interest from anyone other than technology enthusiasts. In the past, they popularized the digital music player with iPod, the smartphone with iPhone and the tablet with iPad. Time will tell if Apple can work the same magic in the smartwatch market.

All of the touted features of the Apple Watch sound really appealing to me. I'm an iPhone user, so this would be the wearable device I would likely choose, even though it would require a phone upgrade. I've also been considering purchasing a fitness band, and Apple Watch would likely eliminate the need.

Being able to see notices and answer calls and messages without having to pull out my phone would be another big benefit. It might lessen my chances of accidentally leaving my phone somewhere. Although I doubt I would use the Watch to look things up on IMDB or a browser like I do constantly on the phone. Surfing a web page on a tiny screen doesn't seem doable, and probably falls outside of Apple's intentions for this product. Still, it is a cool little device that will bring us another baby step into our sci-fi future.