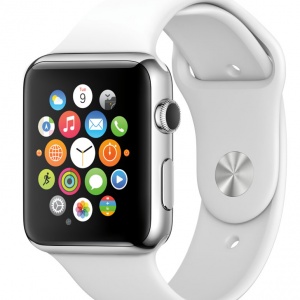 Apple Watch will work with iPhone 5, 5c, 5s, 6 and 6 Plus or later phones running iOS 8 or later. Apple Watch is synchronized with the Universal Time standard and apparently remains accurate within plus or minus 50 milliseconds, making it a good timepiece, but there are a lot of other cool things that the Watch can do.

The display activates when you raise your wrist. You will initially see your chosen watch face, but if you press the Digital Crown, it will bring up the home screen, where you can get to all your apps.

Apps now appear as clusters of simple, circular icons that you can arrange however you like. The clock that appears in the middle of the home screen will take you back to the watch face. The icons vary slightly in size. You can pan around to find apps by swiping on the touch screen, and you can rotate the crown to zoom in and out, viewing a few apps at a time or all of them at once. If you're zoomed out, the icons are too tiny to pick individually, but you can tap on a portion of the screen to zoom into that particular cluster of apps. You can also press the crown to take you back to the normal sized view with the clock in the center. To launch an app, just tap it.

The Force Touch feature lets the Watch differentiate between a tap and a press, so this opens the door for contextually different responses.

If you want to select or customize your watch face, touch the face with a bit of force (not just a tap). You can then swipe through all your choices and select one. You will also see a Customize virtual button, which allows you to pick different colors or select and modify different functionality choices using the crown or touchscreen.

You can bring up something called Glances by swiping upward on the touchscreen. Glances lets you swipe sideways through easily scannable summary data from apps you use often, such as your next upcoming Calendar event, current weather, traffic, your location, your current music, your fitness dashboard or anything else you choose to include, either built-in or third party.

Swipe downward to get to the Notification Center. Using the Taptic Engine, your Watch will "tap" you gently on the wrist when you get notifications, messages or calls. If your phone's sound is off, you could get notifications via the Watch without alerting those around you. When you get a notification, you can lift your wrist to bring it up on the screen.

The speaker and microphone allow you to place and answer calls, record voice messages and dictate messages. There's even a Walkie Talkie feature for voice-to-voice communication with another Watch user.

You can use Siri via the Watch by pressing and holding the crown, or by holding up the Watch, and saying, "Hey, Siri." You can then use Siri as you normally would, for things like getting directions or movie times and dictating messages.