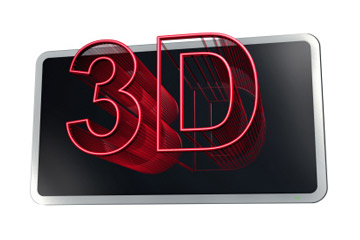 Can your eyeballs handle 3-D images? If you're part of the 10 percent that can't, a 3-D TV probably isn't for you.
artpartner-images/Photographer's Choice/Getty Images

If you're considering a 3-D TV, there are a range of topics to consider before you buy. Start by checking 3-D units at a local store to peruse image quality -- and to make sure you can see 3-D effects.

You read that right. Start by ensuring your eyes will tolerate 3-D images. Roughly 10 percent of people are unable to correctly see 3-D images [source: Eye Care Trust]. What's more, many more people experience headaches, nausea or discomfort when watching 3-D content, generally because of crosstalk or flickering. If you're one of these people, you may wind up using 3-D sparingly, or not at all.

Also, be leery of the hype. In spite of the massive marketing push, only about 2 percent of American households own a 3-D TV [source: Pipeline Pub]. Many people don't like the skimpy selection of 3-D content, or they recently invested in a nice HDTV and aren't ready to splurge again.

But if you're ready for the leap to a 3-D landscape, start by thinking big. The borders of 3-D TVs wreak havoc with the illusion of image depth. What's more, if the illuminated screen is too small, the dark background behind your TV may increase the likelihood that you notice the flickering of active shutter glasses.

Current 3-D technology offers the most impressive effects when it is displayed on a large screen. That's why manufacturers generally only offer 3-D on TVs 40 inches (more than 100 centimeters) and larger.

You may also wonder if you should buy an LCD or plasma TV. Manufacturers are still tweaking all 3-D related technologies so much, and so quickly, that there's no clear advantage to choosing between LCD or plasma for the long run. However, reviewers seem to prefer current versions of plasma units because they have less noticeable crosstalk than LCD. But no one is ruling out the possibility that newer LCD can't match or outperform plasma.

Likewise, you may have trouble deciding between active and passive TV. This decision will likely be even tougher than choosing from plasma or LCD. Neither technology has a clear leg up on the other. But if you have a large number of viewers and a small budget, the extremely affordable glasses used in passive systems will make a lot more sense.

No matter which TV you consider, you'll run into salespeople who tout simulated 3-D, a feature that makes even 2-D content look 3-D-ish. Don't expect this simulated mode to offer much more than a blinding headache. With all things 3-D, content is paramount. If the content isn't originally 3-D, it won't look so great, no matter how nice the TV.

Because 3-D technology is evolving so quickly, do your homework before you buy. Research in-depth product reviews from several sources, such as Consumer Reports, CNET and other tech-centric publications to make sure the model you want is worth the money.

With that bit of effort, you'll find the right TV. And before you know it, your TV watching will take on depth and dimension you may never have dreamed possible, right in your living room.