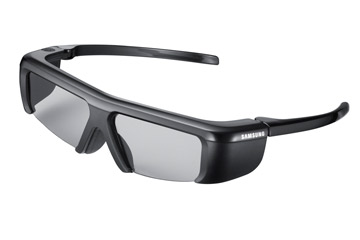 Newfangled 3-D TVs take a slightly different tack toward their ultimate goal, which is to create two separated images, one for each eye. As such, there's no agreed upon standard for conjuring the illusion of a 3-D image on a home television. So TV manufacturers continue to experiment with a variety of established techniques, as well as those that are more unusual, and perhaps, unpractical.

Some home LCD or plasma TVs use a version of the movie theater system based on polarization. Unlike at your downtown theater, there's no projector involved.

Instead, the 3-D TV shows two slightly different images right out of the screen using a system of small lenses. Your polarized glasses make sure each eye sees only one perspective. Your brain does the work of blending things into an understandable 3-D image. This is what's called passive 3-D. Tilting your head backward, forward or to one side can interfere with the polarization process, though. Sitting at an angle to the TV can cause the same issue.

Active 3-D tech is different. In this system, the 3-D TV quickly alternates images intended for your right and left eyes. You wear active shutter glasses synchronized with the TV; these glasses have integrated LCD screens that rapidly flip from opaque to clear (at about 120 times per second), so that each eye sees only the images meant for it. That's why this technology is also called alternate-frame sequencing.

This rapid-fire shuttering system happens so fast that most people don't detect any flickering. The result? A crisp, high-definition 3-D image. As with passive systems, viewing at an angle can reduce 3-D effects, but active TVs have a reputation for outperforming passive TVs in this regard.

Many TVs require expensive, proprietary active shutter glasses that work with only one brand of television. However, manufacturers are considering a standard type of infrared or radio signal synchronization that will be compatible across brands. But regardless of the standard, the glasses are costly; you might pay around $100 for a single pair.

The glasses are battery powered. Some are rechargeable, while with others you can just replace the batteries when they die. Either way, the glasses tend to be a bit on the clunky side and more than a little bit dorky looking, two reasons that manufacturers are racing to create 3-D TVs that do not require glasses of any kind (more on that later).

Regardless of the technology, all 3-D TVs currently share the challenge of crosstalk, which is when one eye partially sees the image intended for the other eye. The result is a blurry ghosting appearance around onscreen objects that is distracting, can cause headaches and, in some cases, makes the program unwatchable.

There's no consensus on whether active or passive 3-D technology is superior. These TVs are just now advancing beyond their first generation, and no company has perfected its version. However, there's little doubt that the holy grail of 3-D TV tech is glasses-free 3-D. On the next page, you'll see how this technique hopes to give you 3-D thrills without the headaches or fashion faux pas.