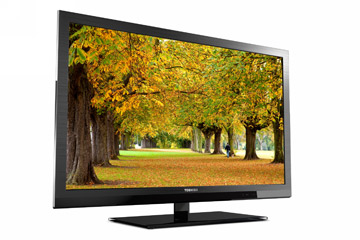 Toshiba's TL515U uses passive 3-D technology, and it comes in sizes ranging from 32 to 55 inches (81 to 140 centimeters).
Image courtesy Toshiba

Your two eyes, spaced roughly 2 to 3 inches (about 6 centimeters) apart, give you stereoscopic vision. Each eye sees a slightly different perspective than the other. Your brain fuses the two points of view, providing depth to the scenes you see.

Old-school video is recorded with a single camera, giving a depthless, 2-D look to images on a typical 2-D screen. But live-action 3-D movies use multiple cameras to record their subjects. And 3-D games use sophisticated computer modeling to create more than one perspective. From there, it's just a matter of relaying that 3-D image to your eyes.

At many early 3-D movies, the audience wore funky glasses with one red lens and one cyan lens. These films used the anaglyph technique, in which images had two different color layers; one reddish and one bluish. Thee glasses meant each eye perceived only parts of the film tinted a certain color, and the result was a rough 3-D image.

Most contemporary 3-D moviegoers wear polarized glasses. The film is shown with two projectors at a slightly different angle, and the glasses ensure that each eye sees only the image meant for it. Again, your brain combines the images and is tricked into thinking you're seeing 3-D objects.

Projectors simplify the 3-D process in a theater because it's easy to set up and synchronize video beamed onto a screen. But in engineering terms, this feat is quite different -- and quite difficult -- to pull off in a home TV. With LCD and plasma HDTVs, there is no projector. You'll read more about how manufacturers create 3-D at home on the next page.

For now, though, keep in mind that you need more than a 3-D TV to have an eyeball-exploding 3-D experience in your home theater. Perhaps most important -- you need access to 3-D content. The vast majority of TV programs are 2-D, with the exception of extra special sporting events (such as World Cup soccer) and the like. This is simply because for every show that airs in 3-D, the producers must also provide 2-D HD content, a fact that ultimately can double production costs.

Games and movies created in 3-D are slowly becoming more common; you can a list of 3-D Blu-ray movies here. Still, you need a device that sends that 3-D content to your TV, and to that end you might use a 3-D Blu-ray DVD player or 3-D compatible gaming system; an older, basic Blu-ray player won't cut it. Sony's PlayStation 3 is one system that not only plays 3-D Blu-ray content but also 3-D games.

Happily, all 3-D TVs are backward compatible with 2-D broadcasts and content, and as 2-D images go, these models produce some of the crispest and most colorful images you'll see on a TV screen. Keep reading and you'll see a lot more about just how these TVs attempt to astound your eyeballs.