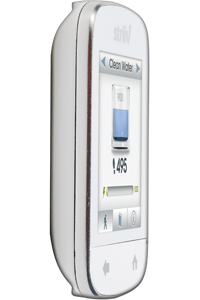 The Striiv has an uncomplicated interface with a power button, home button, back button and touch screen.
Courtesy Striiv

The Striiv is a simple device at first glance. It has a 2-inch (about 5 centimeters) screen with a touch interface. There's a power button on one end of the device and two other buttons -- home and back -- beneath the screen. There's also a port for a micro-USB cable. The cable lets you charge the Striiv's lithium-ion battery as well as sync the data from the device to your computer.

On the bottom of the Striiv is a round hole into which you can insert a key-ring attachment. The key ring locks into place with a quick twist. Pressing the ring attachment into Striiv and twisting the other way unlocks it. You can also use a belt-clip attachment if you prefer. Or you can just throw the Striiv into a purse or bag.

Inside the Striiv, there's a 500-megahertz dual-core processor, a solid-state memory chip, an altimeter and a three-axis accelerometer. An accelerometer is a measuring device that detects changes in velocity. If you've taken physics, you know that velocity has two components: speed and direction. An object moving in a specific direction at a particular speed has a steady velocity. If either the direction of movement or the rate of speed changes, the object accelerates or decelerates.

How does the Striiv detect these changes? It uses a solid-state gyroscope and a proprietary technology called TruMotion. A gyroscope contains a tiny weight that shifts slightly as the device experiences changes in acceleration. On either side of this weight are two small plates that have electric potential energy stored in them. We call this capacitance. As the weight moves toward one plate and away from the other, the capacitance of both plates changes -- increasing the gap decreases the plate's capacitance and closing the gap increases the plate's capacitance. The Striiv's processor detects this change and interprets the fluctuations as movement, registering a step. The frequency and intensity of the steps informs the Striiv if you're walking or running.

The altimeter in the Striiv allows it to detect when you're climbing stairs. Altimeters detect changes in elevation by registering changes in barometric pressure. At lower elevations, pressure will be greater -- there's simply more atmosphere pressing down from above. At higher elevations, pressure is lower. You probably wouldn't notice the change in atmospheric pressure you experience while climbing a staircase, but a sensitive altimeter can register subtle changes.

Walking, running and climbing stairs are the Striiv's focus. But perhaps the real story behind the Striiv is how it uses games and altruism to encourage you to exercise.