Browse the article How SpnKiX Works 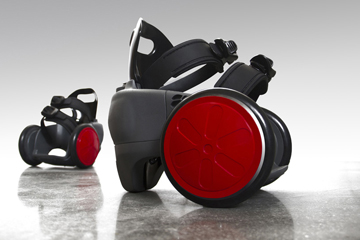 SpnKiX -- motorized skates you strap to your feet
Courtesy of Spnkix.com

Walking is so passé. We've been doing it for so long that we don't even think about it anymore. So why can't we have some device to spice up our walking lives? Well, now we can.

SpnKiX, pronounced "spin kicks" just in case you skimmed over that, are motorized skates that strap to the bottom of your shoes and let you glide over the pavement. Before you go thinking you don't need motors on your feet, consider those long walks with the dog when you really don't feel like walking, or perhaps that long walk to work that you'd like to cut just a little bit shorter. SpnKiX could be the invention for those in between distances that are too long to walk, but anything else is just overkill.

The futuristic skates are controlled by a variable speed wireless remote, have rechargeable battery packs and, after a little practice, can go up to 10 miles per hour (16.1 kilometers per hour). We know, that's not really that fast. But how fast does your current pair of motorized sneakers go? About zero miles per hour? That's what we thought, because they never existed before.

The Nitty Gritty on SpnKiX

Push forward on the remote and the skates' motors move you forward, pull down and the skates will slow you down. Easy enough, right?

There's also a physical brake on the back that you can push down with your heel to help you stop, but the motors will presumably still keep moving. The jury is still out on what happens if you drop the remote while you're riding. Stop, drop and roll?

The skates come with removable training wheels to get you started because even the skates' inventor says they're not the easiest to learn how to use. If it's anything like learning how to ride a bike or use a skateboard, you may want to find a secluded place to learn how to use them. Unless of course you want your 15 minutes of fame to be a YouTube video of you face-planting in front of group of strangers. You know they'll be a remix of that.

The max speed of spnKiX is 10 miles per hour (16.1 kilometers per hour) and there is a weight limit of 180 pounds (81.7 kilograms). Unfortunately, the average American male weighs 190 pounds (86.2 kilograms), so there may be a lot of potential customers who miss out on using the skates [source: CDC].

SpnKiX are made out reinforced nylon fiber and aluminum and are powered by a rechargeable lithium battery pack. If you're thinking about using spnKiX to commute to work, you might want to consider the maximum range is 6 to 7 miles (9.7 to 11.3 kilometers) and then the battery needs to be recharged, which takes about five hours.

It took five years and 30 different prototypes to come up with the final product, but spnKiX started out as a project on the crowdfunding website, Kickstarter. Inventor and designer Peter Treadway (and yes, that's his real name) has two degrees in industrial design and is co-founder of an industrial design consultancy firm.

He launched the project on Kickstarter with the goal of raising $25,000 to fund the initial production of the skates. By the end of the campaign over $120,000 was raised from 300 backers. Not bad for motorized skates you strap to your feet.

Although the skates look like they were made for some sort of rollerskate-parkour hybrid tricks, the spnKiX website clearly says the skates are just for recreational riding and not freestyle endeavors. We seriously doubt owners will be able to resist though. As for their off-road capability: there isn't any. They can, however, do well on wet pavement and a little rain shower.

To own a pair of the skates it's going to set you back a few...a few Benjamins, that is. The motorized skates cost $649 [source: spnKiX]. Yikes! If you want a few extra battery packs to switch out on your daily stroll, expect to pay even more.

Yes, they're a bit pricey, but new technology usually is. If spnKiX sticks around for a while, battery technology will continue to get better and cheaper. Who knows, these skates may take off and be the next best thing to a hoverboard.

I love seeing new tech like spnKiX. Yes, they're a little different, expensive and they don't go very fast...but they're innovative. And that counts for a lot. With so much technology focused on making transportation more efficient it's good to see true alternative forms of mobility. We've been using cars and planes for a while now, but motorized shoes? Nope. Those are new.

Although they look difficult to learn how to use, check the YouTube videos, some people will master them, and I'd bet they figure out a way to put them to some practical use. Here's to hoping spnKiX evolve into a bicycle alternative, or something even cooler. If they make an off-road pair with some serious torque, I'd be all in.