How the Sony SmartBand Works

The Technology Behind the SmartBand 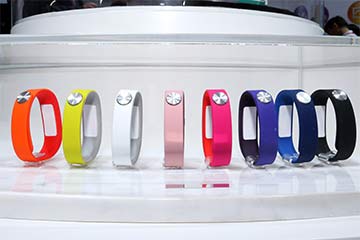 Sony SmartBands in various colors (with the Core in the middle) stand on display at the Sony Corp. pavilion during the Mobile World Congress in Barcelona, Spain in 2014.
© Manuel Blondeau/Corbis

There are two physical parts to the SmartBand: a silicon band, which comes in an array of colors, and the "Core." The Core is the heart of the device; the band is simply a convenient means of holding it. A small, white piece of plastic, the Core has a micro-USB port on one end for charging, plus a multifunction button on the side with three white LED status lights next to it [source: Colon]. The suggested retail price for the SmartBand is $100 while the SmartBand Talk retails for $170 [source: Sony].

The Sony SmartBand (including the SmartBand Talk) works in conjunction with your smartphone. Powering the band are two smartphone apps: the Sony SWR10 connect app and Lifelog. The apps can be used only with an Android 4.4 (or later) and Bluetooth 4 Low Energy, so if you're an iOS fan, you can forget about the SmartBand right now [source: CNET].

When you're using the SmartBand, the Core is constantly exchanging information with your smartphone via Bluetooth. For example, your phone gives positioning data to the SmartBand; there's no GPS in its hardware. Internal sensors in the Core determine, among other things, whether you're walking, running or traveling by car by your cadence and wrist movements.

What if you forget your phone at home or are out of its range? Never fear. The SmartBand saves all of the data it's collecting about you and will automatically send it to your phone once the two devices are reconnected. The SmartBand also vibrates when your phone is receiving a call, email or text, even if you've got your phone in silent mode, which can come in handy. To protect all of this technology, the SmartBand is dustproof and waterproof to 5 feet (1.5 meters), so you can ever shower and sleep with it [sources: Sony, Spence].