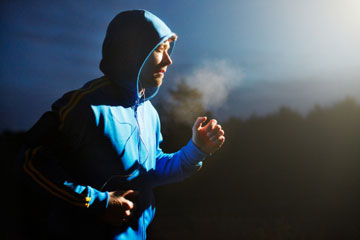 If your running jacket were lined with power felt, perhaps your body heat could power your MP3 player while you jog.
Tim Robberts/Riser/Getty Images

You've probably had this experience: You're on the go all day and haven't had a chance to plug in your iPhone, and just when you need to make a call or check your e-mail, you see that little red icon that indicates your battery is just about to run out. It's so frustrating it actually makes you get a little hot under the collar. But wait -- maybe that's the solution. What if, instead of blowing a gasket, you could somehow convert that excess body heat into electricity and use it to power your phone or another portable device?

You've actually seen a variation of this idea before, if you're a fan of the cinematic "Matrix" trilogy, in which a giant computer network powers itself by siphoning energy from legions of comatose, unwitting human beings. We're not talking about anything that creepy, though. Small-scale thermoelectric power generation, in which body heat is harvested to power portable devices, is a concept that scientists have been looking at quite intently in recent years -- as our craving to carry power-hungry gadgetry in our pockets has continued to grow.

Recently, researchers at Wake Forest University's Center for Nanotechnology and Molecular Materials gave a boost to thermoelectric power generation's prospects when they developed a fabriclike material called "power felt," which is capable of exploiting differences between an object's heat and the room temperature to generate an electrical charge [source: Neal].

One researcher who's worked on the project envisions fashioning a jacket from power felt and using it to power an iPod, an idea that sounds pretty great for cool-weather jogging enthusiasts. But power felt doesn't just have to go in a garment. A flashlight handle swathed in power felt might be a great thing to have during an extended power outage, and a car seat made of the stuff might draw energy from your posterior to power your windows or radio. And there are other non-human energy sources that we might use it to tap, as well [source: Neal].

If you're puzzled as to how your sweaty body could power an iPad on a warm summer day, think of it this way: Almost all the electricity that humans use -- about 10 trillion watts -- is generated by releasing heat energy (usually by burning fossil fuels to heat water) and then converting that heat into mechanical energy. Mechanical energy is then used to crank generators and produce electrical current. This tried-and-true method, called thermoelectric power generation, produces a lot of energy, to be sure. But it also wastes a lot of energy, because the mechanical process isn't that efficient at using heat. In fact, more than half of that heat simply escapes into the atmosphere [source: Jacques].

It would be a lot better, at least in theory, if we could find a practical way to generate electricity directly from heat itself. Scientists have long known that it's possible to do that, because when there's a difference in the temperature of the surroundings and that of an object, a conductive material between the two can use that contrast to generate electrical current, without any turbine or mechanical generator. This is known as the Seebeck effect [source: Timmer, Ozcanli].

The trick to generating and harvesting that non-mechanical electricity is to find the right conducting material. For a while, researchers have been building direct thermoelectric generators that use a metal alloy, bismuth antimony telluride, which has the ability to generate electricity from heat. But that material is expensive and it's not all that efficient [source: DOE].

That's why everyone is so excited about power felt, which -- despite its name -- isn't actually a cloth woven from wool, like the stuff they use on pool tables. Instead, power felt is made up of plastic fibers wrapped around tiny -- and by tiny we mean one atom in thickness -- structures called carbon nanotubes, which are really, really good at conducting electricity. It's also potentially cheap to manufacture, which means we could use it all over the place [source: Neal, Zhang].

Will our bodies ever be a practical source of electricity? 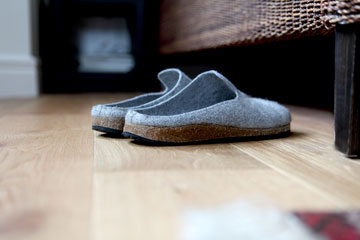 What if these felt slippers were made with power felt? Could they charge your iPhone?
Daniel Allan/Photographer's Choice/Getty Images

While it would be cool to power an iPad with your body heat, we probably don't have to worry about being enslaved to power a giant computer network like in the "Matrix" movies. Humans are a potential source of electricity, but a fairly limited one. An adult male, for example, theoretically might be able to generate 100 to 120 watts of energy. That's not going to light up the Empire State Building, but it might be enough to power some personal electronics devices -- a laptop requires about 45 watts, and a cell phone only needs about 1 watt to operate [source: Ozcanli].

That said, researchers still have a ways to go before we're able to leverage a significant portion of our bodies' potential to generate electricity. While the idea of power felt has promise, the initial demonstration version only has the ability to generate about 140 nanowatts of juice [source: Zhang]. The villainous Agent Smith from the "Matrix" movies would be disappointed, since that's only about a billionth of a watt. Other available conductive materials for converting body heat to energy don't do much better. By one estimate, such devices are able to harvest about 0.4 percent of the body's heat energy and convert it to electricity. That means that if you covered your entire body with thermoelectric generators, you'd only produce 0.5 watts of electricity [source: Ozcanli].

Still, though, we'll probably improve on that performance over time, and also simultaneously develop electronic devices that are far more efficient at using energy than the gadgets of today. Researchers already are working, for example, to develop super energy-efficient medical sensors that could run off a patient's body heat. But the real upside of power felt may come from using it to capture heat energy wasted by our machines. Recent research at the Massachusetts Institute of Technology, for example, indicates that by tapping into wasted heat from laptops and cell phones, we might be able to do the equivalent of doubling their battery life. Lining automobile engines and the inside walls and pipes of power plants with power felt might yield a vast supply of electricity that we never even knew we had [source: Chandler].

I'm a big fan of dystopian science fiction, and the 1999 movie "The Matrix," the first in the trilogy made by the Wachowskis, is one of my favorites. But to me, the Matrix is really more of a metaphor for our present every-waking-moment fixation with synthetic entertainment experiences created by video games and streaming video on the Web than it is a blueprint for an actual future. (In that sense, you could draw a parallel to George Orwell's novel, "Nineteen Eighty-Four," which some say really was a warning against totalitarian tendencies that the author saw lurking beneath the constitutional democracy of post-World War II England.) Unless we make some truly astonishing technological breakthroughs that overrule the laws of physics as we now understand them, a computer network powered by siphoning energy from comatose humans is just a fantasy. For a Science Channel story, for example, I once calculated that if it was possible to harvest 1.3 microwatts of energy from each person on the planet, it would only amount to enough juice to run a set of speakers for a high-end home theater system.