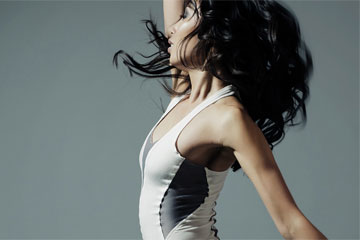 Without proper form, many physical activities, such as Pilates, may be less than beneficial or even treacherous. And there is nothing quite as demoralizing as trying to improve your fitness and instead winding up in a chiropractor's office sobbing in agony. In Pilates, form is so critical that many pay teachers heaping piles of cash to make sure their spines don't look like a pretzel. But teachers are expensive and they require you to, you know, actually leave the house, which you don't always want to do.

Sure, you could invest in a wall-sized mirror that lets you eyeball your movements. But expending energy watching your own figure for proper form is awkward at best, and can cause misalignment -- the very thing you're trying to avoid. That's where the Move comes in.

Move, invented by Jennifer Darmour of Electricfoxy design studio, is an exercise garment laced with sensors and haptic feedback components. The clothing integrates with a mobile app and cloud storage to archive and analyze data on your body's positioning and determine how accurate your movements are. If your mermaid side bend looks more like the hunchback than Ariel, Move immediately activates tiny vibrating motors on your clothing. You'll feel a nudge in the area where your form is less than ideal.

It's sort of like having a hands-on instructor right in your home, minus the touchy embarrassment. Move will also work for more than just Pilates. The system can be configured to help you hone form for yoga, ballet, your golf swing and even your baseball pitching technique.

After your workout is complete, you can review your performance on the app that you install on your smartphone or tablet. You'll see charts and graphs and numbers galore that indicate how well (or how poorly) you kept your body aligned for the activity you specified. You can also upload this data to social networks to seek encouragement or share it with your teachers or doctors, who can provide feedback from afar.

In other words, Move isn't just about geeking out your spandex. It's about improving and accelerating your overall physical performance and preventing injuries.

Keep reading to discover how these so-called e-textiles work. 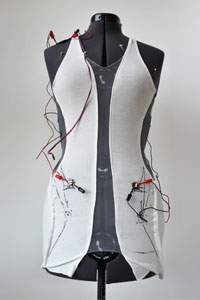 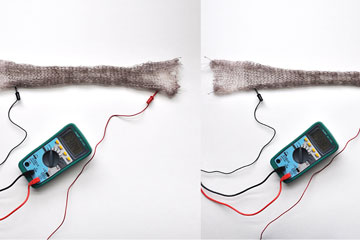 Apply a bit of current from a battery and the material can expand and flex to “nudge” you when you make mistakes, as well as provide confirmation of your corrections.
Image courtesy Electricfoxy

Fashions come and go, but Move is meant to be useful and also to appeal aesthetically.

As Darmour notes, you don't have to follow fashion trends to appreciate the look of an. Simply by putting a garment on your body, you instinctively realize that the look of that clothing is part of the experience of wearing it. To wit, if it looks totally goofy, you'll feel weird, to the point where your workouts get weird, too. But a stylish, sleek body suit? That's an outfit that will propel you to greater confidence and better performance outfit [source: 3lectromode].

Move aims to blend fashion and electronics function. But there's still the matter of actually producing the product on a large scale. There is a tremendous challenge associated with manufacturing such novel products, because textile factories just aren't equipped to handle the integration of electronics into their fabrics. What's more, Darmour points out that electronics engineers and textile makers work in very different industries, and getting experts from these disciplines to understand each other's processes takes a lot of time and energy [source: 3lectromode].

The Move project is a moving target, with numerous prototypes and no finished versions as of January 2013. It's been in development since 2010 and there are still no consumer-ready products on the shelves. There are many reasons for that, including the high degree of complexity in blending materials that by definition require washing with electronics, which don't really appreciate water or laundry detergent.

In the meantime, the Electricfoxy team keeps tweaking its prototypes. To create these experimental models, they use a LilyPad Arduino, which is a circular microcontroller that's around 2 inches in diameter and less than 1 millimeter thick. Arduino controllers can be quickly and affordably programmed for all sorts of inventive experiments, and the LilyPad is specifically made for e-textiles and wearable products, making it perfect for the Move project. You don't need an extension cord connected to a wall outlet to make it run. LilyPad requires only a small, low-voltage battery.

So will Move ever be ready for the masses? Keep reading and you'll read more about Move's next moves. 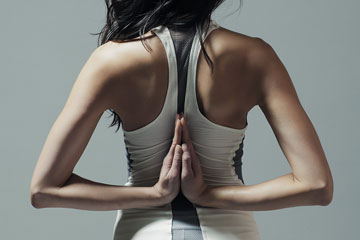 Yes, this hurts our arms just looking at it, too. Move isn’t just for Pilates professionals. It will work with any body type.
Image courtesy Electricfoxy

Darmour told us in an interview that she wants Move to be more than a niche product for svelte Pilates experts. She sees Move as a tool for all Pilates devotees, regardless of whether you're a klutzy novice or a seasoned instructor. The adaptable software is a key component of that ideal.

The Move app lets you easily select a user level. With that information, the software's algorithms understand if you're still trying to learn basic moves or if you're more advanced and trying to fine-tune your form to perfection. As the garment collects data, the software interprets all of your movements and creates meaning out of them, with tools such as charts, graphs and percentages to show you how you're progressing. You can view the information on a timeline and see which moves you regularly perform.

You might think this all sounds wonderful until you see Move's advertisements, which invariably feature athletic, toned models. What if you don't have the build of a supermodel? Well, Move is designed to work with anyone's figure. As you begin using the suit, the software calibrates the sensors to function properly with your body type, no matter if you're large or small, in great shape or still couch-potato shaped.

Pilates is a relatively intense physical experience. That goes double if you're just getting active following a sedentary lifestyle or recovering from an ailment. So Darmour points out that Move is designed to encourage a healthier and more active routine, but it's not meant to prescribe the perfect movements for everyone. She stresses that before taking on any new exercise regimen, including Pilates, it's a good idea to first check with your doctor.

Currently, Move is geared mostly towards Pilates, but Electricfoxy plans to build the app so that it can accurately work with activities like golf, yoga and baseball. And although you can't yet purchase any Move-related products as of early 2013, that time is probably coming sooner rather than later. And then you'll be able to stretch, lean and strengthen your digitally enhanced body like you never have before.

I'm a runner, and one who avoids stretching of all kinds unless absolutely necessary. It's not just that I'm lazy (which is true) but also that I sometimes worry that flexing the wrong muscles the wrong way will be counterproductive or perhaps even harmful -- I've had more than one strained muscle from overenthusiastic stretching sessions. A product like Move, though, could make exercise of all kinds more productive -- and, perhaps more importantly, less painful -- in the long run.