Lacing Up With a D-Tag 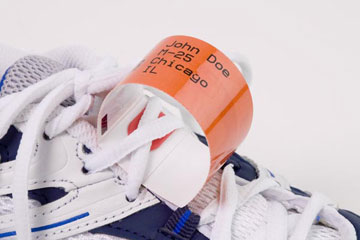 Keep your laces on and you're good to go.
Image courtesy ChronoTrack

Radio-frequency identification (RFID) technology is all about the wireless transfer of information via electromagnetic fields. It's not based on visual communication. It doesn't depend on physical contact. A radio transmitter-receiver (also called a reader) sends a signal to the tag and then reads its response. The transmitter-receiver then passes the data to a computer. It's a useful bit of technology that allows us to track livestock, pets, products, baggage and even our fellow human beings.

RFID technology began clocking marathon runners in the 1990s and has since become standard. The race timers simply fit the runners with individualized RFID tags and set up transmitter-receivers at key points along the race. The antennae for these readers typically stand on either side of the track or travel through a padded mat on the surface of the track itself.

Several different companies compete in the race-timing tech market, including Innovative Timing Systems and RFID Race Timing Systems. And then there's ChronoTrack, makers of the D-Tag system -- so named because the tag loops through the runner's shoe laces to form a "D" shape. The tag's position places it in close proximity to the antenna-loaded road mats that runners trample over in the course of the race [source: Impinj].

When a D-tagged runner passes over the mat, the antenna reads the signal and tells the computer who the runner is, where they passed and when they did it. At the end of the race, they can just dump their tags in a wastebin -- or stuff them in that drawer full of sweat-stained marathon keepsakes. Not only does this cut down on post-race hassles for the runners, it also streamlines the whole process for race organizers. If you ever had to stand in line to check a tag after a grueling race, you can appreciate that feature.

Not everyone loves the D-Tag, however. A 99.84 percent efficiency rate for these types of UHF RFID systems is exceptionally high, but it's not perfect -- and certainly not perfect enough for some of the more finicky running enthusiasts. Plus, the whole system depends on laces and shoes. If you prefer running barefoot or in a gorilla costume, then you might have to improvise.

But hey, it's a small price to pay to for a small slice of cosmic certainty.