How can a bracelet track your heart rate?

Browse the article How can a bracelet track your heart rate? 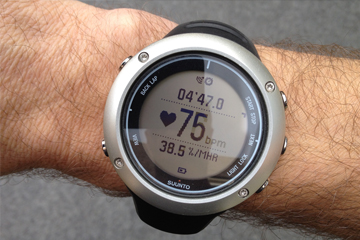 It turns out that simply moving might interfere with a heart tracker's ability to tell how hard you're working.
Erik van Hannen/Getty Images

Five minutes into his 5-kilometer (3.10-mile) run, 50-year-old Greg can feel his heart pounding. Although he's been training for a month, this will be his first run without walking intervals. Greg wonders whether his heart rate will stay in the target zone, which in his case, is 85 to 145 beats per minute [source: American Heart Association].

Later, after a successful run and cool down, Greg checks the fitness tracker he wears around his wrist. In addition to counting steps and tracking sleep, the wearable technology also monitors his heart rate. Unlike the markedly increased beats per minute Greg felt throughout his run, the data from his wrist tracker shows only a slight increase in heart rate. He begins to wonder, how exactly does a wristband track heart rate? And is there room for error?

Bracelet trackers use an LED light to make the capillary veins in your wrist visible to a sensor that measures how fast your blood is pumping. This information is then interpreted as your heart rate and is presented in a "beats per minute" data format. This sounds simple enough, but there's a catch. To receive a reading that's as accurate as possible, the wearer should be absolutely still. Talking, moving or sweating could throw off the results, and these are three things we typically do while wearing fitness trackers.

Another problematic issue stems from the location of the device. As blood moves away from the heart and to the extremities, it slows to a rate that is lower than the rate your heart is actually beating. In fact, a test of five bracelet-style fitness trackers found they measured the wearer's beats per minute at a far lower rate than an electrocardiogram (EKG), a test used to monitor heart rate using the heart's electrical signals [source: NIH]. In some cases, the fitness trackers recorded a difference of nearly 50 beats per minute — posting results far lower than an EKG, even when worn simultaneously [source: Profis].

A fitness tracker worn as a wristband probably isn't an optimal choice for an extreme athlete — or even just an athlete interested in extremely accurate data. If you want more than a casual look at your heart rate, but still want it in bracelet form, consider a heart-rate monitor watch. Like a fitness tracker wristband, these devices require that you hold still to get an accurate reading. However, instead of taking a passive reading of your pulse, the watch requires you to touch your finger to a built-in pad. The result is a more accurate reading, one that the average wristband fitness tracker can't yet offer [source: Zimmermann].