Time for a Timeline 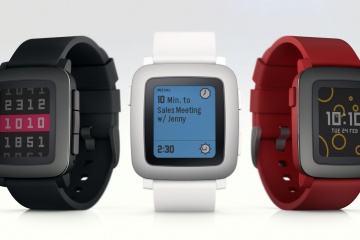 The color display on the Pebble Time isn’t a touchscreen, but the watch has a longer battery life than most competitors as a result.
Image courtesy of Pebble

In February 2015, Pebble unveiled its next generation watch, called Time. Pebble Time banks on what the company sees as key strengths, such as simplicity and an intuitive interface that offers plenty of options without being overly complicated or unwieldy.

It has a thinner, more durable body that's less geeky looking than its predecessor. It's still nearly waterproof and still works with a vast array of iOS and Android devices, yet the price of $199 is far less than many competitors. Pebble Steel, a stainless-steel version, will go for $100 more.

Most obviously, the Time has a color LCD screen. Although it's not touch capable and doesn't have the brightness or resolution of, say, the Apple Watch, it retains the original Pebble's weeklong battery life.

The Gorilla Glass lens is a tough type of glass that resists the inevitable scratches and scuffs that all well-worn watches are sure to encounter. The bezel is made from stainless steel in red, white or black, and you replace the floppy silicone band with any standard watchband you like.

One of its niftier features is an integrated microphone that lets you reply to messages and dictate notes just by speaking toward your wrist like a Secret Service agent. The microphone feature isn't as full-fledged as the one on your smartphone, so it doesn't (yet) work with every voice-activated app, but it's a quick and easy way to send messages or take notes without having to punch little keys on your smartphone.

All of these features, however, may be trumped by the new Timeline interface. Timeline is a new approach to one of the most difficult design aspects of smart watches — finding a fast, easy way to access a plethora of different kinds of information without a lot of control buttons or a touch screen.

Time's three side-mounted buttons access your life's timeline in the past, present and future, respectively. A single click of the appropriate button will often reveal the information you're looking for at the moment, whether it's your work calendar, fitness activity update or sports scores. Pebble thinks the Timeline interface is powerful and flexible enough not just for a watch, but for other types of wearable technology, too.

As with the first Pebble, the company isn't looking to reach the masses with its latest offerings. Pebble doesn't want to be the biggest or richest tech company. It does, however, want to sell the most functional and fashionable watches around, even if it means they'll mostly be targeting the kind of cult followers they garnered during the first Kickstarter campaign.

Speaking of Kickstarter, Pebble returned to the crowdfunding site to fund its second-generation watch. More than 70,000 followers kicked in funding during the campaign, yielding well over $18 million. With that kind of unprecedented online support, Pebble and its innovative watches aren't going away anytime soon. The company might have just over 100 employees, but it has harnessed enthusiasm and goodwill for its brand that will carry it forward in the fight against bigger, richer companies for years to come.

I don't own a smart watch. Not yet, anyway. That's probably because I feel like I already tinker around with technology far too much and that adding yet another device to my life would be another unnecessary distraction. Then again, my smartphone is already a pain in the neck that I wish would just go away. Perhaps with a smart watch I'd spend less time messing with the phone and more time actually getting things done.