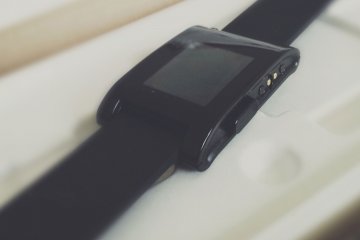 The first iteration of the Pebble was sleek and simple, aesthetics which continue to be critical to the device’s design.
© Alexander Hafemann /Getty Images

The first Pebble watch snagged more than $10 million in crowdsourced funding, providing Migicovsky with the cash to hone his engineering and marketing acumen and to jumpstart manufacturing. The Pebble project had survived by evolving.

Fittingly, the device itself evolved as well. It was no longer a quaint, jury-rigged toy based on an aging Blackberry operating system. It came with an ARM Cortex-M3 CPU, memory, ambient light sensor, 3-D accelerometer and Bluetooth adapter. A touchscreen would've made Pebble's weeklong battery life pretty much impossible, so instead the device uses a monochrome Sharp LCD, a thin, flexible e-paper screen that consumes little power but still provides suitable contrast and resolution.

The watch isn't waterproof, but it's water resistant down to about 120 feet (37 meters), thanks in large part to the fact that there are no ports cutting into the watch's body. Sans USB port, you use a magnetic cable affixed to the body to transfer power.

Rather than relying on visual cues alone, you set the watch to vibrate when it detects new notifications. For people who want to break their obsessive habit of ceaselessly glancing at a smartphone, this capability alone might be enough to convince them that Pebble is worth owning.

At first, Pebble was just a lifeless piece of hardware. To make the watch truly impressive, its makers needed to offer a large number of apps, and they decided that an open-software developer kit was key. With this kit, anyone with programming skills can assemble apps for Pebble, in essence helping to propel the product forward. Migicovsky nurtures and encourages the developer community to spark ideas and bring them to fruition, meaning better functioning apps and happier Pebble customers.

The developers have not disappointed. By the thousands, they've created apps for weather tracking, traffic alerts, exercise monitors, games and more.

Notably, you can also download and install new watch faces for your Pebble. With each new face, the watch takes on a different appearance. You can select a silly watch face one day and a more businesslike one the next — it's an easy way to change up your watch's look without ever having to take it off.