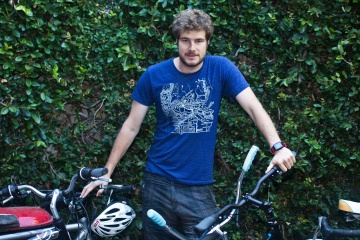 To see the beginning of Pebble's story, we have to start at nearly the end of the alphabet, that is, with the letter Y. That's because Pebble got a serious boost from Y Combinator, a well-known and respected business incubator that helped push Pebble from concept to real business.

The idea is pretty simple. Y Combinator provides a relatively modest amount of cash, as well as expertise and enthusiasm, to get a business concept rolling. Of the dozens that enter the program, some will thrive, some will die. Others, like Pebble, become rock-star poster children for how such programs spark innovation.

In 2008, Eric Migicovsky was an engineering student with a few ideas about how to make smartphone technology better. More specifically, he wanted to reduce our fixation of constantly grabbing our phones to check for new notifications. A wristwatch, he thought, would be much more efficient.

He fiddled around with some leftover pieces of electronics and some programmable code and hacked together a test smart watch that communicated directly with smart phones. The watch was initially called InPulse, and Y Combinator liked the concept well enough to fund Migicovsky's plan. He received $150,000 in seed money, which he hoped to use to lure liked-minded capitalists with thicker wallets.

Unfortunately for Migicovsky, his plot failed. Although a few investors were intrigued by the watch, none would bite. His first generation watch died an agonizing death before it even had a chance.

In April 2012, with what eventually became an historic decision, Migicovsky turned to Kickstarter to fund his fledgling idea. Kickstarter is a so-called crowdfunding website, through which just about anyone can request money for just about any conceivable project. Many projects fizzle out because of lack of interest. A rare few, like Migicovsky's, gather funding momentum and far exceed their fundraising goals.

The Pebble project had a modest Kickstarter goal of $100,000, which the company exceeded after just two hours. In 28 hours, the total was at more than $1 million. When the campaign finally closed in mid-May, more than 68,000 excited backers had pledged nearly $10.3 million in the hopes of making the Pebble watch a reality.

The watch first began shipping in January 2013. By the end of 2014, the company had sold roughly 1 million products.