Why haven't we switched to global time? 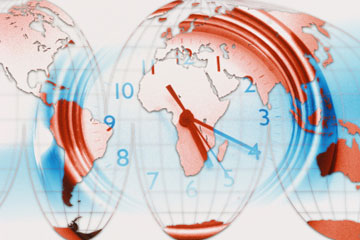 Could the world one day operate on global time?
Benjamin Shearn/Photodisc/Getty Images

From one angle, the notion of getting everyone on the planet to toss their existing 12-hour clocks in the trash and switch to a new system seems about as crazy as getting them to stop speaking their native languages and switch to Esperanto, the artificial language created by a 19th-century Polish linguist who mashed up bits and pieces of various European romance languages [source: Britannica]. But it's not so crazy when you consider that it has pretty much already happened on the Internet, where by the late 2000s English had become the dominant, if not universal, language [source: Mydans].

It's even less crazy when you consider that back in the late 1800s, railroad companies created the present system of standard time zones that covered regions, and forced cities and whole countries to stop using local solar time and switch to their new system. Of course, the rail barons had a powerful bit of leverage; if you didn't adapt to their new system, you might not be able to have train service, which in those days would signal the demise of any community [source: Mansfield].

In contrast, Swatch -- which gets people to buy its watches by making them look cool -- didn't have the clout to force anyone to adopt its new system. And a lot of people scoffed at it as if it were the product equivalent of the Newton -- that kludge of a handheld tablet that Apple tried to peddle in the early 1990s before Steve Jobs came back to the company [source: Hormby].

And Internet Time, as critics quickly pointed out, didn't solve another, more important problem that interferes with global interactions. Even if people used the same artificial time standard around the planet, their circadian rhythms -- that is, the pattern in which their bodies release hormones in reaction to exposure to light and other influences -- would remain different. As Judah Levine, a physicist for the National Institute for Standards and Technology, pointed out to The New York Times: When it was @430 in cyberspace, New Yorkers might be up and about, but Beijing residents would still be asleep in their beds. "They [Swatch] have the same problems with the Earth going around the Sun as we always did," he said. "The Internet can't change that" [source: Harmon].

And it didn't. If you're still really intrigued with the Internet Time notion, you may be able to find a vintage Net-Surfer or one of the other models that displays Swatch beats on eBay [source: eBay]. But when you suggest to someone that you have that conference call at @637, don't expect them to know what you're talking about.