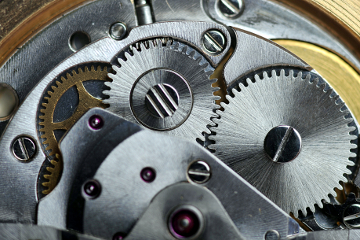 If you ask someone for the time and his answer is "Wow!" it's just possible he's wearing a Harry Winston Opus Eleven watch. This remarkable timepiece is one of the most ingenious, playful, and innovative wristwatches ever made. Of course, that distinction comes with a price: This cool watch sells for a cool $230,000.

The Opus Eleven is an example of a modern collectible watch. It's handmade and runs on a movement that is completely mechanical -- no motors or batteries. It's a piece of superb craftsmanship and a stunning example of sophisticated design. The complex mechanism is a source of continual amazement.

Harry Winston, Inc., one of the world's leading jewelers, introduced the Opus Eleven as a limited edition watch in 2011. Only 111 watches were made and each required four to five weeks to assemble [source: Giguet].

Opus Eleven's creator, Denis Giguet, spent 18 months designing a watch "to explode the time" [source: Giguet]. He wanted the numeral indicating the hour to fly apart in three dimensions -- not an easy feat to pull off inside the confines of a wristwatch. His watch created a sensation when it was introduced at Baselworld, the annual Swiss watch and jewelry show.

The Opus Eleven has three parts:

If a watch makes a statement about its owner, the Opus Eleven shouts. The white gold case is big and flashy, measuring 2 by 1.75 inches (54 by 43 millimeters), and it's fully three-quarters of an inch (19.5 millimeters) thick. The back is transparent, revealing part of the movement. If your yacht sinks, the watch is waterproof down to 30 meters (98 feet) [source: Haute Horologie]. A black alligator-leather strap with gold buckle holds this sizeable watch on your wrist.

It's not surprising that such a watch would come from Harry Winston. Especially when you consider the company's innovative line of timepieces.

The company made 100 Opus Eleven watches available for $230,000 each. Another 11, decorated with diamonds, cost $289,000 apiece [source: Blades Magazine]. For most of us, the watch is way out of our price range, but why would even someone who could afford the Taj Mahal spend so much on a wristwatch? Is it just a rich person's toy? Is it bling raised to the nth power?

The truth is that fine timepieces have had an allure going back centuries. Precision-made mechanical watches have continued to attract buyers even in the age of digital watches and battery-powered movements. There are a number of reasons why:

Any or all of these reasons might prompt someone to dig deeply into his or her bank account to own an Opus Eleven. We can't discount the cool factor, either. It's hard to define, but the Opus Eleven clearly has it in spades. In some ways, this watch really is a toy. It evokes the same kind of playful delight that we all remember so fondly from childhood. And that can be worth a lot.