Browse the article Do we have astrology to thank for clocks? 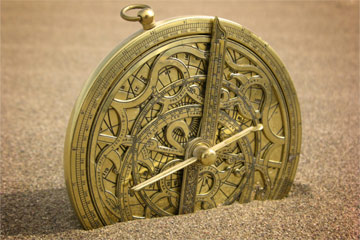 Forget your fancy smartphone and give it up for the world's first analog computer, the astrolabe.
iStockphoto/Thinkstock

Here's the Taurus Love Forecast for a recent week in April, according to the horoscopes page of The Huffington Post: "Saturday's New Moon in Taurus is both an opportunity and a challenge. If you're stuck in a rut and resist trying different experiences, then your hopes for romance will diminish."

Science regards astrological predictions like this one as superstitious nonsense today. But in the ancient world, astrology and astronomy were the same discipline. Many political elites hired professional astrologers and sky-watchers to monitor and catalog the motions of the sun, moon and five visible planets (Mercury, Venus, Mars, Jupiter and Saturn). To do this, they established a sort of celestial map based on the sun's apparent path in the sky. They called this path the ecliptic, and then referred to the sky extending above and below the imaginary line as the zodiac. As the sun followed the ecliptic over the course of a year, it moved through 13 constellations, 12 of which formed the signs of the zodiac.

A horoscope, originally expressed as a diagram, defined the positions of the planets and signs of the zodiac at a particular time and place. Astrologers used the diagram to predict a person's future, believing that the positions of celestial objects influenced life on Earth, especially human affairs. For example, the Taurus Love Forecast we mentioned gets its unique attributes because of the position of the new moon, the time at which the moon appears as a narrow, waxing crescent.

To map the night sky accurately, astrologers relied on detailed charts and complex mathematical formulas. This proved cumbersome until, around 400 A.D., when a few brilliant scholars invented a device known as an astrolabe. Landlubbers liked it for making astronomical measurements, while sailors found it handy at sea for determining the altitude of the sun or a star, which could then be used to calculate latitude. It was, without a doubt, the slide rule of the Middle Ages -- the world's first analog computer.

The Technologies of Time

With an astrolabe, anyone with a little working knowledge of mathematics and astronomy could calculate the position of celestial objects, the time of year, the altitude of any object, the latitude and much more. Clearly, astrologers would have found such a tool indispensable, for it would have provided the data necessary to make predictions. For example, the back of the astrolabe carried both zodiac and calendar scales. Using these scales together, astrologers could find the sun's position for a given day or the day the sun is in a given zodiac position. They could also determine which constellations were visible at certain times of the year and where to look in the sky to see them.

One of the most important functions of an astrolabe was to tell the time of day or night. During the day, astrologers based their calculations on the altitude of the sun. At night, they used the altitude of a visible star. Either way, they could find the time in a four-step process that involved two operations with the alidade and then two operations with the rete and the rule. It was an accurate way to get the time, but it wasn't as easy as flipping open a pocket watch.

Luckily, interest in mechanical clocks flourished at about the same time as astrolabes. The first tick-tocking timekeepers date back to about 1300 and bear the trademark invention that made them possible -- the escapement [source: Andrewes]. The earliest examples, known as verge escapements, consisted of a crown-shaped escape wheel, a vertical shaft known as the verge, and a horizontal bar, bearing weights on each end, known as the foliot. The verge carried two rectangular projections (pallets) that took turns catching in the teeth of the escape wheel. As the wheel turned, it rotated the verge foliot, causing them to oscillate back and forth. Thus, the escapement controlled the escape wheel's rotation and sustained the clock's oscillation. This in turn regulated the speed at which the clock operated. 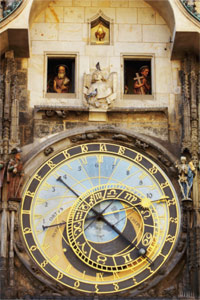 My teenage son doesn't wear a watch, preferring to find the time on his smartphone. (He could also use the device to get his horoscope and an interactive map of the night sky, if he so desired.) It made me wonder if an astrolabe maker from medieval Europe would have bemoaned the slow and steady decline of his trade as mechanical watches became more popular. Perhaps the astrolabe could serve as a lesson for modern watch companies. Timex, take note!