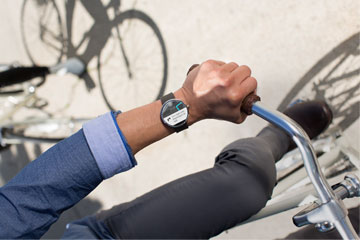 This shot of the Moto 360 smart watch, which will run Android Wear, is slated to be available in summer 2014 in the United States.
Image courtesy Motorola

Picture a device that serves up timely, localized info from your smartphone's apps and Web searches based on what it predicts you want to know. Look, here's a traffic report as you head off on your daily commute. Here's a notice about a meeting change. Here's a flight update as you head to the airport. Now imagine that you don't wear the device on your face (Google Glass) or dig it out of your pocket, but access it with a glance at your watch, a few swipes at its touch screen, or perhaps a spoken command.

This is the world conjured by Google's launch video for Android Wear, its software platform for wearable tech. Whether the products that run the software will justify the hype remains an open question until summer 2014, when the first devices hit the market. Industry wonks though have already dubbed it a potential game changer, particularly while an Apple equivalent remains mere rumor.

Wearable technologies, most notably smart watches, have long struggled to gain traction in the marketplace for all sorts of reasons: aesthetics, price, functionality, battery life. But devices running Android Wear will enjoy a strong boost right out the gate, thanks to Android's market dominance, its wide marketplace of apps and Android Wear's streamlined operating system, which is designed specifically for wearables.

Two much-buzzed companies have already thrown wrist pieces into the ring. LG kicked things off by announcing its G Watch, a less bricklike alternative to the customary smart watch square, followed by Motorola Mobility flogging its Moto 360, which shoots for chic with its range of leather bands and brushed metal finishes even as critics question the real estate possibilities of its round face. Asus, HTC and Samsung have signed up for watch work as well [sources: Chen; Motorola].

As for how much these brave new wearables will set you back, we can only speculate. The Moto X smartphone, which ran Google Now (a key component of Android Wear, which we'll get to) and was a kind of spiritual precursor to the Moto 360, was somewhat overpriced. In addition, the engineering R&D required to jam vital electronics into a round package could drive up the 360's sticker price. Then again, Motorola could opt to eat some of those costs, banking on affordability to make a bigger splash. The International Business Times projects an initial range of $279-$400 for the Moto 360, depending on options, which would place it above the top-end Pebble smart watch, the $249 Pebble Steel [source: Halleck].

But Android Wear is more than an engine for running smart watches and other wearable gear. It's the latest step in Google's long game, built on the backbone of the Google Now technology.

Android Wear pursues a different philosophy than older watches or phones of the smart variety. Like Google Glass, its approach is more contextual, more about enhancing your experience of where you are and what you are doing. And the key to it all is Google Now.

Google Now is a service that formerly rode shotgun on the Google Search app found on Android phones running Jelly Bean (versions 4.1 and newer). It has since spread to Google Glass, as well as to desktops, portables and tablets. Although Web types at times dismiss it as Google's answer to Siri, its design philosophy and features are all together more personal and specific [sources: Google; Olivarez-Giles].

Basically, Google Now works by monitoring your search patterns, Web history and, optionally, apps and programs. Based on what it finds there, it tries to supply useful info or alerts before you think to ask -- things like traffic and weather at your location or destination, incoming messages, sports scores, package tracking info, currency conversions, translation help and travel tips. With your permission, it also can pull information from your Google accounts like Gmail or from third-party products. To ensure that you get the information that you want when and where you need it, Google Now tracks the time of day, your current location and your location history [sources: Google; Olivarez-Giles; Wood].

Android Wear distills all of this Google Now business into a form that will fit on a tiny screen. Indeed, part of Android Wear's appeal lies in this new, streamlined user interface (UI), which combines simple contextual information, verbal commands and swiping. Think of each screen display as a card, a sticky note's worth of information. Google's service sends a virtual stack of these cards, called a "context stream," to your smart watch or other wearable, where you can flick through them as needed. A typical implementation would use vertical swipes to page through the main landing cards, then use left or right swipes to drill down into sub cards that offer added particulars on the chosen topic [sources: Google; Google].

When all else fails, you can always say "OK Google," which will activate voice input for texting, e-mailing or other data entry. This command will also take you to a special menu called the "cue card" where you can access various options, including tailoring your voice commands to specific apps [sources: Chen; Google; Google; Motorola].

With the launch of Android Wear, all the pieces are in place for a wearables renaissance, but Google's real advantages over the competition hinge on its massive app marketplace and its relationship with the wide array of hardware developers that already run Android.

Too Much of a Good Thing?

Social media and apps expand their reach at the cost of privacy. Online, this is an opt-in or opt-out situation, albeit a slippery one. But as the proliferation of smartphone cameras and the introduction of Google Glass bring this tradeoff to the real world that could all change, and not just for the adopters. Will Google Now's nosiness take us to a tipping point? Amid headlines of National Security Agency snoops and Webcam hackers, will devices that track our location and activities, read our e-mails and listen constantly for our voices, finally cross the line between convenient and creepy?

Flick of the Wrist

Wearable computers were once the stuff of science fiction, but they always hovered within the realm of possibility. Beyond the technical challenges presented by miniaturization and power consumption, the trick lay in coming up with a small-scale but practical user interface. Eventually, the PDA and smartphone booms incentivized companies to chip away at these issues in their quest for better, smaller and more versatile devices.

Over this period, smart watches failed to capture more than our imaginations. IBM Research and Citizen Watch's 2001 WatchPad packed Bluetooth, a fingerprint sensor (and the kitchen sink) but died on the workbench. In 2005, Fossil's Wrist PDA could not capitalize on Palm OS's reign. Fossil, Suunto, Tissot and Swatch all ginned up devices based on Microsoft's Smart Personal Object Technology (SPOT) -- a sort of early, subscriber-based Internet of Things with an FM-radio backbone -- only to see the service walloped by Wi-Fi, cellular and FM Radio Data System (RDS) [sources: Baker; Minder].

A few companies have made limited headway more recently. After a rocky start, Kickstarter-born Pebble is slowly carving out a niche, but reviews remain mixed at best. Samsung's Android-powered Galaxy Gear sold 800,000 in its first two months but posted a 30 percent return rate at Best Buy [source: Reuters].

If, as some argue, the age of the smart watch is upon us, then Android Wear or Apple will likely lead the way. But while Google has already dipped its toe into the wearables market with Google Glass, Apple continues to keep mum regarding its possible offerings in the smart watch sector even as Android Wear prepares Android app developers for launch [sources: Chen; Google; Minder; Reuters; Wood].

For now, numerous questions remain. Chief among them: How specifically will these devices work, and what specs can we expect in terms of battery life, connectivity, glare reduction, screen quality, security and so on? Will Google charge a licensing fee? And, given its experience with Google Glass and its current talks with chip makers, will the company bring its own device to market, or focus instead on building its diabolical robot army aboard its secretive barge flotilla?

Because Android watches, like Android smartphones, will vary widely, we can only speculate. A strong reliance on WiFi or cellular, piggybacked off your smartphone, seem likely, and power issues and a lack of ports could necessitate OLED screens and nonstandard charging methods like induction, solar or self-winding. If Samsung's Galaxy (the phone) and Galaxy Gear (the watch) pairing is any indication, watch makers might also limit which smartphone a given Android Wear device can pair with [sources: Chen; Halleck].

Until Google releases more information, or until the first wave of devices hits the market this summer, we're left with more buzz than answers.

A Pebble in Google's Shoe?

A Kickstarter success story, Pebble's rugged, versatile smart watches helped revive the smart watch market even as they frustrated critics and early adopters. Waterproof and available in a choice of colors and straps, with readable, backlit black-and-white displays, Pebble's gadgets helped set a bar that Android Wear and others must clear, and at a reasonable price: $150 for the old model, $249 for the newer Pebble Steel. The kicker: Pebble plays well with Android phones or iPhones [sources: Pebble; Stein].

Why have smart watches never caught on? Does it come down to timing and the availability of suitable technologies, or does the answer lie in culturally preparing the ground via marketing? I mean, remember when we used to think it was weird and rude to talk loudly to ourselves in public, or to stare blankly at other people, possibly while secretly filming them or accessing their OkCupid profiles? Thank goodness Bluetooth headsets and Google Glass put an end to that. Oh, wait ...