Will the Clock Stand the Test of Time? 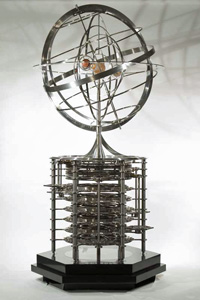 The Orrery uses the same type of mechanism as the 10,000 Year Clock to measure the movement of the planets.
Photo by Nicholas Chatfield-Taylor courtesy of The Long Now Foundation

The prototype proved the clock's operation to be sound, but the permanent clock will be much larger in size -- 60 feet (18.3 meters) tall in fact, and will be able to withstand earthquakes and hold up to basic human interaction (but not vandalism). The ultimate location for the clock is to be inside a mountain with access only by foot. Two potential sites have been surveyed -- one in Texas on Amazon.com founder Jeff Bezos's property, and one in Mt. Washington in Nevada.

Even though the clock will be dependent on human input, the binary digital mechanism is accurate to within one day in 20,000 years [source: Long Now Foundation]. The clock is self-adjusting. On a sunny day, the clock prototype recalibrates at noon with the sun using a built-in solar synchronizer. At the precise time, a lens focuses a sunbeam to heat and expand a metal band inside the reset mechanism. Because the mechanism is so slow, ticking once per minute, the working parts do not wear out as quickly. In fact, the clock will tick as many times in 10,000 years as a mechanical wristwatch does in 100. While many wristwatches probably wouldn't last as long, the clock is built with endurance in mind.

Because of the clock's six-dial face, it's designed to be readable even if people use a different way of recording time. The moon, sun and stars are a universal constant. Unlike a clock as famous as the one in the English Houses of Parliament clock tower, which rings the famous bell known as Big Ben 24 times each day (once each hour), the 10,000 Year Clock will ring once a day. English composer Brian Eno designed the elaborate chimes to ring a unique tune each time. Over 10,000 years, the chimes would ring 3.5 million times, yet would never sound the same twice. The chimes themselves are a mechanical innovation. The brass chime tubes surround a series of phased Geneva wheels which are turned in tune with a progressive algorithm that generates a unique bell-ringing order each day. The larger version of the permanent clock will feature brass bells [source: Long Now Foundation].

The clock may prove to be nothing more than a conversation piece. But even if that's the case, it has served its purpose. For more information on clocks and related articles at HowStuffWorks.com, take a look at the links in the next section.

The Long View Orrery: Where are we now?

The Long View Foundation has designed an 8-foot (2.4-meter) planetary display mechanism dubbed the Orrery that displays the position of the six visible planets in their orbit around the sun. The same mechanical-binary mechanism that runs the dials of the 10,000-year clock adorns the base of the planetarium. The Orrery is similarly accurate to the clock (28 bits of accuracy versus 32 in the clock) and uses the same Geneva gear technology. Each of the six planets (Earth, Mars, Mercury, Jupiter, Saturn and Venus) is ground from natural stones that resemble the planet's appearance. A larger-scaled version of the Orrery is slated to be built and placed in conjunction with the Clock of the Long Now in its intended mountainous home.