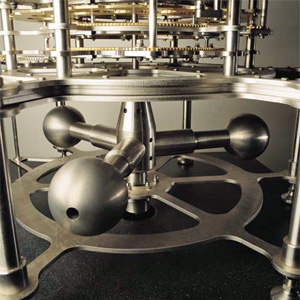 The tortional pendulum creates the timing for the 10,000 Year Clock.
Photo by Rolfe Horn courtesy of The Long Now Foundation

When Hillis laid out all the parameters the clock needed to meet, several potential problems popped up. First and foremost was how to construct it so it would work for 10,000 years. Not only does it need to work for so long, it needs to be accurate. In addition, the clock needs to be universal enough to be able to be read in the future. Who's to say the human race will still use the same measure of time in the year 09234?

When posed with these questions, Hillis outlined some basic principles:

When it came time to decide on a power source and the framework for keeping time, Hillis considered several options. Each had its drawback. For instance, using water and wind power would expose the mechanical structure to those elements. Tidal gravitational changes, seismic and plate tectonic movement and geothermal energy are all potential power sources, but because the clock needs to be able to be made small enough to fit in your living room -- scalability becomes a problem. Radioactive decay could work, but how would people feel about that? Electronics would power the clock, but what if electronics are just a fad?

Hillis's favorite method for powering the clock is for a person to wind the clock by hand, to encourage responsibility for the device [source: Long Now Foundation]. But for the prototype, two helical weights, similar to weight-gravity systems found in old clock towers throughout the eastern United States, are mounted on each side of the clock. The helical weights slide down drive tubes to create power. A torsional pendulum controls the timing and a solar synchronizer helps maintain accuracy. The pendulum doesn't tick away like a wristwatch. While a wristwatch ticks every second, the 10,000 Year Clock ticks once a minute [source: Long Now Foundation].

A serial binary adder converts the timing from the pendulum to one of six dials on the clock's face. The dials represent the year, century, sun (solar position), moon (lunar phase), horizons and star field. From the dials, you can decipher the hour, day, year, century and millennium. It was designed so anyone that stumbled upon the clock could read it. A manual is included as part of the design.

While that's a quick look at the construction of the prototype, the next section delves a little deeper into the inner workings of the 10,000 Year Clock. Continue reading to learn more about the mechanical binary mechanism as well as the Geneva drive system. You might be surprised to see how simple the logic behind the technology really is.