The Need for Long-term Thinking 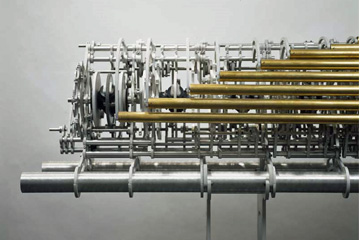 The chimes on the 10,000 Year Clock, designed by Brian Eno, will never play the same combination of sounds twice over the course of 10,000 years.
Photo by Nicholas Chatfield-Taylor courtesy of The Long Now Foundation

The Long Now Foundation wants people to look at everything through the eyes of someone who may live 1,000 years. In other words, step away from the need to run, run, run without regard for your surroundings and take into consideration what your actions may do to the big picture.

Take Earth's climate, for example. Global warming is an issue that often sparks controversy on all sides. But while people try to devise quick solutions, the Long Now Foundation says it's important to consider the changes taking place now that will change the way the world works in the future. Long-term thinking gives way to short-term gain.

Hillis and his colleagues claim that if the human race can somehow collectively replace short-term thinking with a long-term approach, the world would ultimately be a better place now and in the future. But people are visual creatures. The need for a beacon -- a constant reminder -- often is the only way to get a point to stick.

Stonehenge is one such beacon. Speculation of its purpose ranges from an observatory to mark prehistoric events to a burial site. While little is known about the mysterious stone structure in southern England, it has stood as a lasting image of cultural thinking beyond anything seen recently. Hillis believes the Clock of the Long Now would be a present-day cultural reminder of generations past and a constant reminder of long-term thinking [source: Brand].

The clock symbolizes forward thinking, but it's also designed to function longer than any other clock in the world. On the next page, we'll begin to learn about its inner workings and the obstacles Hillis had to overcome before the prototype was built.

By all accounts, the Mayan calendar ends on Dec. 21, 2012. For this reason, the 2012 phenomenon has picked up steam recently as those who yearn for the doomsday event are twisting and turning facts into fiction and predicting the end of our civilization on that day. There's even a motion picture depicting all sorts of chaos through the magic of special effects. The truth is, it doesn't appear that anything out of the ordinary will happen on Dec. 21, 2012. No asteroids have been detected recently, nor is the planet Nibiru hurtling through space on a collision course with Earth. Chances are good that the Mayans simply stopped updating their calendar at 2012 and it's about to run out of dates -- just like the one you buy for your kitchen wall every year.