by Patrick J. Kiger
Prev NEXT
5

In 2008, a second was added simultaneously to every atomic clock on Earth. 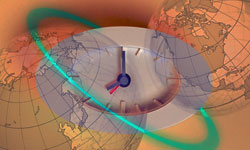 Atomic clocks around the world are reset periodically to be sure they keep perfect time with the planet.
George Diebold

Just before 7 p.m. on Dec. 31, 2008, scientists wound the atomic clocks around the world ahead exactly one second, in order to synchronize Coordinated Universal Time (UTC), the international standard for atomic clocks, with the Earth's rotation. It wasn't the clocks that were off, but rather the planet, whose rotational speed is slowed down about two milliseconds each day by a variety of brakes: space dust, magnetic storms, solar winds, resistance from its own atmosphere, and most importantly, the tug of the moon's gravity on Earth, which not only causes ocean tides, but also makes the entire planet bulge.

The effect of all that is to lengthen the solar day, and throw it ever so slightly off in comparison to our super-accurate atomic clocks. It would take hundreds of years for the discrepancy to become noticeable, so that the position of the sun in the sky would be different from the time on a house clock, (which you've probably set according to the correct time phone number, which is based on the UTC). To prevent that from ever happening, in 1972, an international agreement decreed that atomic clocks periodically would be adjusted in unison [source: Dowling].