by Patrick J. Kiger
Prev NEXT
9

An atomic clock uses a single electron from each cesium atom to keep time. 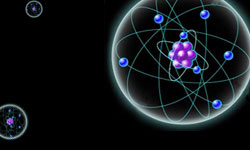 Electrons orbit the center of the atom -- like planets orbiting the sun.
HowStuffWorks

As we explained previously, electrons orbit the center of an atom, which is called the nucleus. Imagine an extremely tiny version of our solar system, with planets revolving around the sun, and you'll get the general idea. Physicists have discovered that electrons are amazingly regular in their movements -- they tend to remain within a narrow range of orbits, with the distance from the nucleus determined by how much radiation they're emitting at a given moment. The distance between the lowest orbit and the highest orbit that an electron moves in is the frequency.

In the case of cesium, which is used in atomic clocks, scientists focus on just one of the element's 55 electrons -- the outermost one, which occupies an orbit that's conspicuously higher than the rest. The difference in energy between the outermost electron's closest orbit to the nucleus and its farthest orbit corresponds to a radio frequency of 9,192,631,770 cycles. That's the part that scientists actually use to calculate time and break it into incredibly brief units of less than a billionth of a second [source: Sciencemuseum.org.uk].