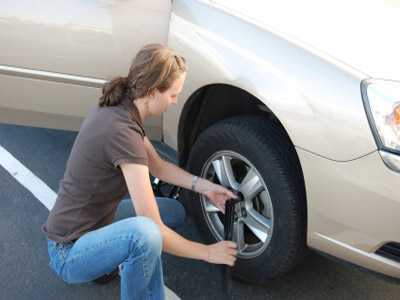 Car Gadgets Image Gallery An exhaust air jack would make this job much easier by using the car's exhaust to lift the car up. See more pictures of car gadgets.
Naomi Bassitt/©iStockphoto.com

If you've ever had to change a tire in the middle of nowhere on the shoulder of a gravelly road, you might consider the exhaust air jack a dream come true. These automotive gadgets make the arduous task of lifting a car off the ground far less painful and awkward -- simply by letting the car's own exhaust do the dirty work.

Traditional portable jacks, like the ones that come with your car, can be intimidating to the uninitiated. They have to be placed at a certain point on the chassis for safety, then fitted with a bar for leverage and cranked up, and up, and up. It takes a bit of strength and a lot of patience -- qualities most drivers find in short supply when a tire goes flat.

The exhaust air jack lifts a vehicle using emissions coming from the tailpipe. A hose attaches from the exhaust to a big sack placed under the car. The air coming out of the pipe fills the bag, and voilà! The car lifts off the ground.

These gadgets stay inflated for as long as 45 minutes, though you should keep in mind that your car will be idling and using gasoline that entire time. Air jacks come in different sizes and capacities and can lift vehicles as far as 30 inches (76 meters) from the ground. Exhaust jacks deflate in as little as five seconds when the job is finished, and the PVC-coated woven canvas folds up to fit in your trunk until you need it again.

Using exhaust air jacks is easier than you may think. They are available in two- or three-ton sizes, and the one for your vehicle depends on how large and heavy it is. No matter how big the vehicle, exhaust jacks lift it up the same way:

The bottom of the automotive gadget's balloonlike sack is protected from sharp stones, sticks or whatever debris may lurk under your car by a PVC coating. Manufacturers say there's no danger of pressure buildup in the engine because it takes very little pressure to lift the car.

Common uses of exhaust air jacks go beyond changing a tire on the side of the road. They can also be used to lift the front or rear tires so that you can put tire chains on two wheels at once. These automotive gadgets can even be used to lift trailers, boat trailers or basically anything with a frame and a couple of wheels.

You shouldn't do heavy work while underneath a car lifted on an exhaust jack, but, then again, it's not recommended that you crawl under a car lifted on a regular jack, either. Those situations call for a set of ramps or a sturdy floor jack, while emergencies call for a lift you can keep in the trunk, like an air jack.

Read on to find out what other uses these gadgets have.

Other Uses for Exhaust Air Jacks 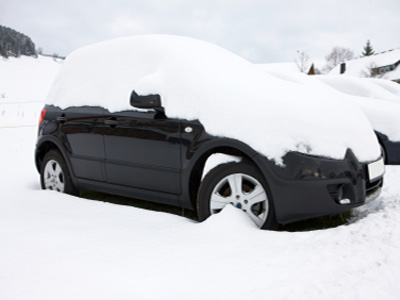 Air jacks were first invented for and used by extreme off-roaders. When a 4x4 is miles from civilization and gets a flat on a rock-strewn incline, a regular jack just isn't going to work. To make matters worse, you're going to have a real problem getting a tow truck out there -- if you can get cell phone reception to call for help in the first place. But tough, inflatable exhaust jacks could get a truck lifted and a tire off the ground anywhere, no matter the surface or the angle of the ground where the vehicle is sitting.

The gadgets that got off-roaders out of trouble now have uses beyond motorists stranded on the side of the highway with a flat tire. Cars stuck in snow, mud, sand or any other surface where tires are spinning instead of grabbing traction can be rescued by using an exhaust air jack rather than waiting for assistance. Drivers in colder climates can avoid getting stranded in inclement weather by using them to quickly install snow chains for extra traction, but keep in mind that snow chains can severely limit the car's maximum speed and fuel efficiency. If you're towing something in a trailer, you can use them to stabilize the cargo in your trailer. Even farmers in tractors stuck out in the back forty can use exhaust air jacks to free themselves and continue working.

­In addition, if you can use these air jacks to change tires, rotating them can be less of a chore (though those stubborn lug nuts are still up to you). As long as you have a running engine with an exhaust pipe and space for the bag under the frame, you'll have a way to use an exhaust air jack.

To learn more about exhaust air jacks and other automotive gadgets, please see the links on the next page.