How the Ego Flash Works

Browse the article How the Ego Flash Works 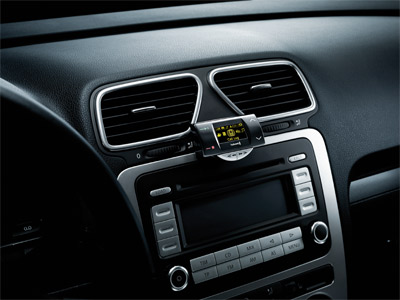 Over the last few years you've probably gotten pretty attached to your cell phone. And sometimes there are phone calls that you just have to make, even if you're driving a car when you have to make them. But you also know that using a cell phone while you're at the wheel of your car is dangerous. Many states have banned it outright. So, if you need to make a call while driving and you don't want to (or can't) pull into a parking lot, what can you do?

A lot of newer cars come with hands-free cell phone devices installed, but if your car doesn't have one of these, the Ego Flash from Funkwerk Americas, Inc. may be what you need. The Ego Flash is a full-featured hands-free device that works with Bluetooth-enabled phones to let you carry on conversations while keeping your hands on the wheel as much as possible. Like most aftermarket automotive gadgets, you can have it installed professionally or you can install it yourself. Once in place, you can use it much the same way you use your Bluetooth phone, except that now you can leave the phone in your pocket.

A microphone mounted near your dashboard picks up your voice and you hear the voice of the person at the other end of the line coming through your car's audio system, so it's not much different from talking to somebody in the passenger's seat. And if there's nobody you want to talk to at the moment, you can use it to listen to music stored on your cell phone or your Bluetooth-enabled MP3 player. It also has an iPod controller, but this is only available if you purchase the optional Ego iDapter kit. ­The Ego Flash is easy to set up and easy to use. Over the next couple of pages, we'll look at some of the features offered by the Ego Flash and see just how simple these gadgets really are.

Functions of the Ego Flash

The Ego Flash is about as full-featured a hands-free device as you could ask for. A lot of the things the Ego Flash can do for you are the same things your cell phone can do, but it does them in a way that's not distracting while you're driving a car. For instance, it has caller ID, automatic redial, and a phonebook filled with numbers for your contacts. It can also do some things that your cell phone probably can't. For instance, if you have a Bluetooth-enabled MP3 player or MP3 music on your cell phone, the Ego Flash can play it through your car's audio system. As we mentioned on the previous page, it also has an iPod controller built-in and a cable to connect an iPod with the unit.

The following are just a few of the many functions of the Ego Flash:

The software in the Ego Flash will almost certainly be revised in the future and it's even possible that new features will be added, so new software can be uploaded to the Ego Flash via its Bluetooth connection. On the next page, we'll discover how easy it is to use the Ego Flash's current feature set by looking in more detail at its installation and use. 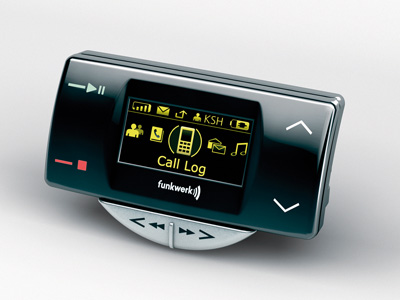 The Ego Flash can be programmed to recognize up to 10 different cell phones.
Courtesy of Funkwerk Americas, Inc.

Installing the Ego Flash is fairly easy; in fact, it's probably easier than most aftermarket automotive gadgets. The Ego Flash consists of three parts -- the control unit, the electronics box and the microphone. The electronics box is the bulkiest of these parts, because it's where most of the heavy electronic "lifting" goes on. It doesn't have to be in physical contact with either the control unit or the microphone, so you have some leeway in deciding where you're going to place it. However, because the electronics box has the Bluetooth antenna in it, it's important that the front of the box not be blocked by anything metallic or even by plastic panels with some metallic content. This means you can't just shove it in the glove compartment and forget about it. You can't put it behind the dashboard, either. A good place to mount the electronics box is underneath the dashboard on either the driver's or passenger's side. Installation kits for most makes and models should be available from the dealer who sold you the Ego Flash.

The control unit, meanwhile, is where the user controls are, so it needs to go somewhere that's easily accessible from the driver's seat. It comes with an adhesive pad so it can be attached to any available surface. The microphone also comes with an adhesive mounting pad; the manufacturer recommends that it be placed either behind the steering wheel or on the A-pillar between the side window and the windshield. Mounting it on the window is illegal because it may block your vision.

After installation, the Ego Flash needs to be programmed to recognize your cell phone. It can be programmed to recognize up to 10 different cell phones, so every member of your family can use it. Voice commands can be activated by pressing a button on the control unit. Instructions for doing all this are available in the Quick Guide and User Manual that comes with the Ego Flash. Names and phone numbers can be entered into the Ego Flash's directory using a built-in program called the Speller, which allows you select numbers, letters and groups of letters using the keys on the control unit.

Once set up is complete, using the Ego Flash is easy. It can be controlled via voice or the keys on the control unit. Now you're ready to start making phone calls. The Ego Flash will alert you to incoming calls using the same ringtone that your phone uses, but now the ringtone will come through your car's audio system. The Ego Flash also has ringtones of its own you can select, if you choose. The phone number for the incoming call will appear on the control unit's LED display. To accept the call, just press a button. Whatever you're listening to through your vehicle's audio system will be muted automatically and replaced by the call's audio. Making an outgoing call isn't much more difficult. You simply select the name of the person or business you want to call using the Ego Flash controls and press a button to call them, much as you would on your cell phone. Or you press the Ego Flash button that activates voice control and select the party you want to call without using your hands.

As briefly mentioned earlier, the Ego Flash also comes with an iPod controller if you purchase the optional Ego iDapter kit. With this kit, you can connect your iPod via a cable that comes with the iDapter (the cable also serves as an iPod charger) and control it with the Ego Flash's buttons and on-screen menus. When you're driving, these larger controls are much easier to use than are the iPod's normal controls.

So there you have it; the Ego Flash is easy to install and simple to use. If you'd like to read more about automotive gadgets and other related topics, follow the links on the next page.