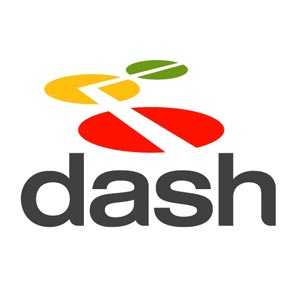 The Dash Express, the first GPS receiver with two-way connectivity, was released in February 2008.
© Dash Navigation

The idea of using a Global Positioning System (GPS) receiver to many drivers has always been, for the most part, appealing. No matter how well we know some parts of town or memorize all the secret one-way shortcuts through a city, there are times when our spatial reasoning will simply shut down and lead us astray. Most trusty GPS receivers can get us to an unknown location or out of a mess with relative ease by readjusting our route when we get off track or maybe even offering the road less traveled in order to avoid nasty traffic jams.

This is what any typical GPS will do for drivers, and some higher end models will even go the extra mile, providing services that give useful information on restaurants, hotels, movie theaters and other important points of interest for everyday road warriors. Some have even begun to offer entertainment features, such as MP3 player capabilities, Bluetooth connectivity and video.

Despite all of these perks, many think it's time for someone in the car navigation market to reveal the next step on the GPS evolution timeline. If you've paid any attention to the electronics blogs over the past two years, you might believe that Dash Navigation is offering just that. Back in 2006, the company announced the Dash Express, the "first two-way, Internet-connected GPS navigation system." After several years of tweaks and redesigns, the Dash Express was finally released in February 2008, and its makers originally claimed the device would offer two major new innovations to the typical GPS that will render all others "practically obsolete."

­Less than eight months later, however, Dash Navigation surprised the tech industry by announcing that it would end production on the Dash Express, and any hardware associated with it, to focus solely on software development. The company cited difficult economic times and tougher competition from smartphones offering similar technologies. Customers who purchased a Dash Express can still use it as it was meant to be used, and we, of course, can still take a look at what it can do.

What exactly are the two big features the Dash Express boasts? What are some of the other typical GPS features it offers? What powers the Dash Express? Is it the game-changing GPS the company meant it to be, and how have critics and consumers reacted to it so far? What are Dash Navigation's plans for the future, and could the still influence the GPS market? 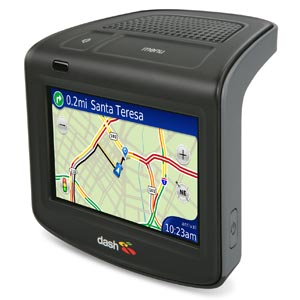 The connectivity features on the Dash Express make it a little more than your typical GPS, which may appeal to those looking for more than just directions.
© Dash Navigation

The main function of the Dash Express is, of course, as a GPS. In this respect, the Dash Express works like most portable car navigation systems -- a GPS chipset receives signals from GPS satellites that orbit the earth in order to determine your car's exact location. The chip then processes the information and displays it onto your GPS screen over a map, helping you determine where you are on the planet. The Dash Express specifically uses a SiRFstarIII chipset, a high-performance satellite signal processor.

The big deal with the Dash Express isn't so much its chipset, but an extra feature that gives drivers more connectivity while they're out on the road. Actually, it's really two features: The Express offers, on top of its typical GPS navigation, Internet connectivity through both Wi-Fi access and GPRS (General Packet Radio Switch).

By now, many people are familiar by now with Wi-Fi -- most laptops and other handheld devices come with built in Wi-Fi capability, allowing them to connect to any nearby network that follows 802.11 wireless standards. The Dash Express's Wi-Fi antenna and receiver connects specifically to 802.11b and 802.11g networks. GPRS, on the other hand, may not be as well known as Wi-Fi, but you may already be using it if you have any handheld devices that surf the Web -- it's a radio technology typically used for cell phones to connect to the Internet.

These two technologies constantly search for networks, keeping drivers connected to the Internet as much as possible while they're in the car. The Dash is synched up specifically with Yahoo! Local search, which can feed drivers up-to-date information on everything from highly rated restaurants, new movies, nearby apartments for rent and the nearest low gas prices.

The Dash's typical approach to ­traffic, what it calls TruTraffic, offers another small innovation -- a constantly updated network of traffic information that acts like a library built by the drivers themselves. The Dash Driver Network automatically (and anonymously) collects driver's routes and sends them to a database. The database can analyze traffic building up in one part of town and notify a driver of congestion in that area. According to its manufacturer, the more people using Dash Express technology on the road, the more information will accumulate, and the more accurate it will become.

Drivers with a Dash Express can also create a MyDash account over the Internet and use the Send2Car feature to send addresses from the home or office directly to the GPS in order to plan ahead. If the Dash Express is on, it should immediately receive the address and plan the route from its current location; if it's off, the address will cache and be resent once you turn the device on. 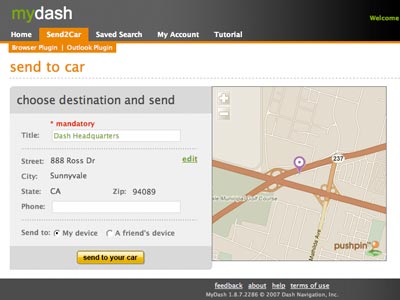