How to connect an iPod to your car stereo 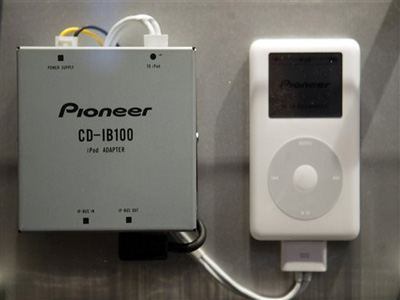 Auxiliary input jacks like this one make it possible for drivers to listen to their iPods while they're driving. See more pictures of car gadgets.
Chevrolet/AP

Back in the day, having a car meant constantly having to organize its interior, or, more specifically, reuniting errant cassette tapes with their matching plastic cases. As time marched on, cassettes gave way to compact discs. Multi-disc magazines helped reduce the clutter, but the musical selection in your car was still limited to a few hundred songs, at most.

Then MP3 players like the iPod came along, and the inner space of music lovers everywhere was forever transformed. By donning a pair of white earbuds, people can drown out the outside world to a personally customized soundtrack. Wouldn't you know it -- that's what we do when we get in the car and crank up the stereo! It was inevitable that iPod lovers would figure out ways to connect their beloved gadget to their vehicles' sound system.

For many, spending lots of time in transit is a fact of life: Whether you're an on-the-go student, a commuting office worker or a salesperson with lots of territory to cove­r, it's easy to spend huge chunks of time behind the wheel. If this is the case, wouldn't it be great to have access to thousands of your favorite songs, rec­orded talks and archived broadcasts? Wouldn't it be great to stop worrying about burning these selections permanently to compact disc just so that you could ferry that CD to your car? Wouldn't you like to stop hoping your burned CDs don't somehow get lost, scratched or rejected by your car CD player as unreadable?

If you answered yes to any of the above, then keep reading. This article will examine the various ways to hook up an iPod to your car's sound system -- from the quick and cheap to the pricey and highly engineered.

­To learn about the different types of iPod in-car connection methods, go to the next page.

You have three basic options to consider when connecting your iPod to your car's sound system:

Let's take a look at some of the advantages and disadvantages of each system. First, let's explore the cassette option. For cars that still have cassette decks, this may be the easiest and cheapest method. Unfortunately, that low price comes at a cost -- you'd get much lower sound quality than you would with a more expensive option. Luckily for you, it's very simple to use: The cassette converts the iPod's audio signals into magnetic signals that can be read by the car's cassette player. As we mentioned earlier, it's also relatively cheap. Expect to pay around $25.

Next on the quality and price scale are wired and wireless FM modulators. That's just a fancy way of saying the adapter becomes a miniature FM radio station inside your car. Instead of beaming Top 40 hits to your car stereo, the adapter sends the song that's currently playing on your iPod out through your speakers. Today's adapters allow you to choose the FM station you want to use to transmit the signal to your car stereo. Ideally, you want a station that has a pretty weak or nonexistent local signal to avoid interference from live radio broadcasts.

­Finally, you have the option of connecting your iPod directly to your car's stereo. Many major auto manufacturers now offer a factory option for an iPod stereo interface, but you'll be glad to know you've other options if buying a new car for this feature just isn't feasible. There are numerous adapter kits available to retrofit your factory-issued radio to play your iPod. Many makers of aftermarket car stereos include a jack for auxiliary devices right on the front faceplate. We'll explain these in greater detail later in this article. Be warned that you'll have to shell out a pretty penny for this kit -- anywhere from $150 to $700.

BMW was one of the first automakers to offer purpose-built iPod connections for its car stereos. By 2005, a full third of all car manufacturers would provide iPod hook-ups available as factory options. In 2004, Apple CEO Steve Jobs predicted the eventual death of CDs and other physical media: "I think burning CDs is passé already. Why would you burn a CD anymore? Just plug your iPod into your car!" [source: Levy]

We're going to explore what goes in to hooking up iPod adapters to your car stereo. Levels of required expertise vary, but careful attention and patience on your part can get the job done. Here's how to connect each type of iPod car adapter:

These systems let you control your iPod and view track and artist data through the car stereo. They also keep the iPod charged. Some models also have a pass-through feature that allows you to retain the use of your CD changer.

A lower-maintenance direct-to-stereo method uses the auxiliary input jack on an aftermarket stereo. With these, you simply connect a wire from your iPod's headphone jack to the stereo's input jack. Keep in mind that this will not keep your iPod charged, so you might want to buy a cigarette lighter power adapter if you go this route. 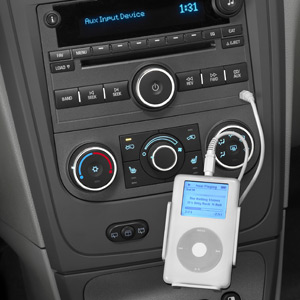 This Pioneer iPod adapter, as seen at the 2005 Consumer Electronics Show, allows users to connect their iPods directly to a car's sound system.
Joe Cavaretta/AP

Which iPod car adapter should you choose? As we've seen, there are a lot of different adapters out there, and this variety will likely grow along with the soaring popularity of iPods and iPhones. Consider what's most important to you -- whether it's convenience and ease-of-use, price, durability, features, or design.

Here are some questions potential buyers should ask themselves prior to purchase:

Smart stereo manufacturers have caught onto the iPod craze and are creating products tailored to accommodate the demands of iPod Nation. Expect automakers and aftermarket companies alike to make it easier to play your iPod behind the wheel.

To learn more about the iPod and ways to add it to your auto entertainment system, check out the links that follow.­